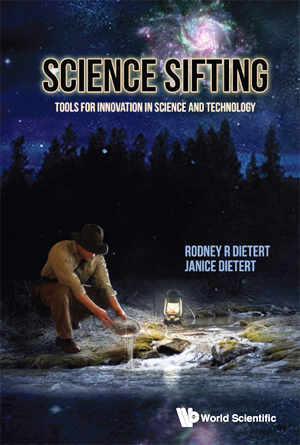 Designed primarily as a textbook, the book offers general strategies and specific tools to promote scientific creativity and facilitate a career in research. It describes the features of great scientific breakthroughs and “discusses how to access and use information from diverse sources,” says Rodney Dietert, professor of immunotoxicology in Cornell’s College of Veterinary Medicine, who co-wrote the book with his wife, Janice Dietert.

The books offers strategies to access, store, mobilize and integrate information in ways that support the development of novel research ideas. Each stage of the research career is discussed, including long-term strategies for balancing career success and personal satisfaction.

Topics covered include focal points in scientific breakthroughs, the use of concepts maps in research, the need for different vantage points, information as patterns, fractals for the scientist, memory storage and access and the use of meditation, sleep, play and synchronicities.

“Researchers need tools that are holistic and can sustain them throughout their research careers,” says Dietert, “so this book provides many useful tools to support flexibility, adaptability and creativity across a long-term research career.”

The book also serves as the textbook for a Cornell course, Tools for a Lifelong Career in Research (co-taught with Jerrie Gavalchin, associate professor of animal science) and is a resource for half-day workshops Dietert has been giving at scientific society meetings and universities.

“It is designed to help often-narrowly trained scientists step outside their problem-bound box and gain broader perspectives for problem-solving using such strategies as dance, art, sleep, meditation, hobbies and play. These strategies allow us to broaden our capacity to access information from a variety of sources to address challenges and solve the problem at hand,” Dietert says, “and it’s based on the premise that creativity can be learned.”

Dietert says that because the book was written with the Cornell course in mind, it draws on campus connections and examples of Cornell scientific creativity and breakthroughs. “For example, the anecdote about Cornell physicist Richard Feynman, who said that he worked out a Nobel Prize-winning calculation of electron orbits after watching a student spinning a plate with Cornell’s seal in a cafeteria, and the so-called Cornell plate is discussed and cited,” Dietert says, “and Barbara McClintock’s history is scattered throughout the book. It also features a chapter on Joseph Novak’s Concept Map creations.”

The 288-page book includes 31 exercises to enhance creativity and improve research that Dietert says he uses in his own work, the course and the workshops.

The preface, titled “A Personal Meditation on Creativity,” is by Cornell Professor Roald Hoffmann, winner of the 1981 Nobel Prize in chemistry, and includes some of his new poetry.