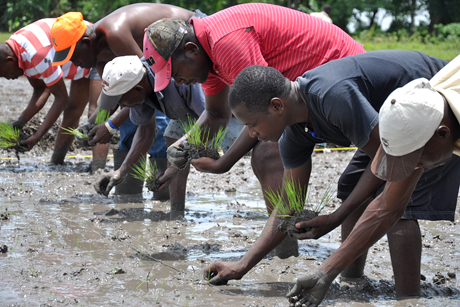 During the first week of June, Erika Styger, director of programs of the SRI (System of Rice Intensification) International Network and Resources Center (SRI-Rice) at Cornell, trained 17 Haitians in the northern Coronel-Dubre region of Haiti in how to train farmers to improve rice productivity through the use of the SRI methodology.

SRI-Rice is providing training and technical assistance for a new initiative funded by the Better U Foundation, a charitable organization founded by actor Jim Carrey, and its partner, the iF Foundation (BUF/iF), to improve agricultural productivity and marketing in the northern and southern regions of Haiti.

The 17 Haitians achieved "Level 1 Training of Trainers" status in the SRI program and planted five demonstration plots as part of the training. 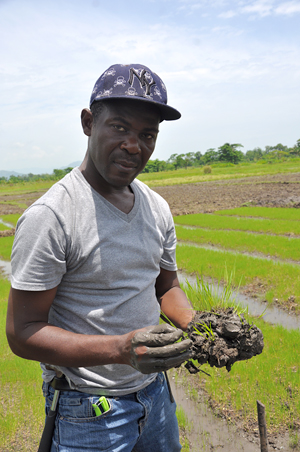 Erika Styger
A trainee plants rice as part of SRI-Rice, which introduced SRI to Haiti in 2010 after the earthquake in partnership with the Better U Foundation.

They soon will plant two additional 2.5-hectare plots to create a large demonstration area. SRI-Rice also will assist the iF Foundation to develop data collection methods using tablets and cellphones in a pilot phase this year that will expand to the entire BUF/iF Haitian program in 2014.

SRI-Rice, in partnership with the Better U Foundation, introduced SRI to Haiti in 2010 after the earthquake. Simultaneously, the USAID-funded Watershed Initiative for National Natural Environmental Resources (WINNER) in Haiti started working with the SRI method. In March 2011, a two-day colloquium on SRI in Haiti was co-organized by SRI-Rice, the Better U Foundation and WINNER, under the Ministry of Agriculture.

“Data analyzed from nine sites showed significantly improved rice productivity with SRI methods compared to the currently used methods in Haiti,” said Styger. Since 2011, Oxfam America has also started working on SRI, focusing on the central of Haiti, which is also the focus area for WINNER.

“The BUF/iF initiative will complement these initiatives, working in northern and southern Haiti, with the goal of transforming the rice sector not only by improving productivity but also through better rice processing and marketing of Haitian grown rice,” Styger said.