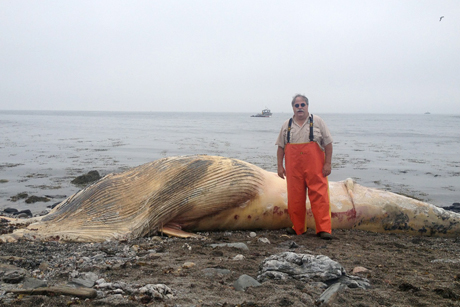 Katherine E. Bemis '15
Willy Bemis stands near a 25-foot minke whale that washed up on a private beach in Cape Elizabeth, Maine. 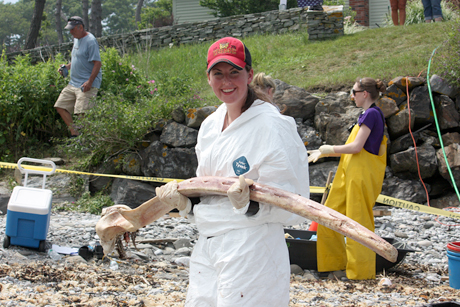 Cap Mona
Alexandra Morris, an incoming senior at Indian Creek School in Annapolis, Md., and a student at Shoals Marine Lab this summer, holds one of two lower jaw bones from a minke whale that washed ashore in Cape Elizabeth, Maine.

When a 25-foot, 10,000-pound minke whale washed up dead on Kap and Christina Mona’s property in Cape Elizabeth, Maine, June 30, the couple found themselves with a whale of a problem: how to get rid of the carcass, which smelled worse by the minute.

Under Maine law, it is the owner’s responsibility to dispose of dead animals that wash up past the waterline on private property.

By the morning of July 3, a team of more than 30 students, researchers and wildlife specialists – from the Cornell- and University of New Hampshire (UNH)-administered Shoals Marine Lab, the University of New England and Marine Mammals of Maine, a nonprofit that helps with stranded marine animals – showed up on the Mona family’s rocky beach. Equipped with machetes, knives, waders and protective overalls, the team spent the next seven hours dissecting the minke, the most common whale in the Gulf of Maine.

The whale’s soft parts were trucked away for composting to the University of New England in Biddeford, Maine. Meanwhile, the skeleton was divided into sections and taken to a Shoals Marine Lab facility outside of Portsmouth, N.H., where it will be composted in horse manure for the next year, the standard way to clean a skeleton. Eventually, it will be used for teaching purposes at Shoals and Cornell.

“Our Whales, Seals and Sharks course at Shoals started on Monday [July 1],” said Willy Bemis, the John M. Kingsbury Director of Shoals Marine Lab, a marine science teaching and research lab on Appledore Island, located in the Gulf of Maine. That same day, Bemis received an email asking if he wanted a dead whale.

Bemis and colleagues realized they had a unique learning opportunity, so they revised their course schedule and planned for two days before the July 3 dissection. Ten students from Bemis’ course, along with staff and faculty members, traveled on the lab’s research vessel, the J.B. Heiser, 40 miles from Appeldore Island to Cape Elizabeth, just south of Portland, Maine.

“It was such great timing, so we made it a big part of our course,” said Bemis, who will retire this summer as the lab’s director to return to Cornell’s Ithaca campus as professor of ecology and evolutionary biology. John Pennock, a UNH associate professor of natural resources and the environment and director of UNH’s marine program, Jackson Estuarine Laboratory and the New Hampshire Sea Grant College Program, will take over as interim director of Shoals.

The beached minke whale was named Willy the Whale, in honor of Bemis’ retirement. The cause of the whale’s death is unknown.