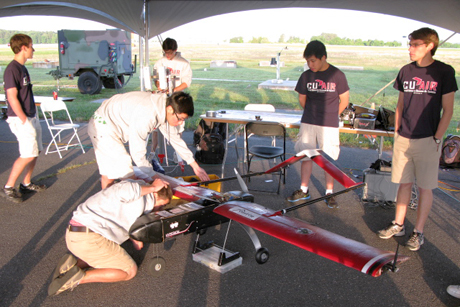 Provided/CUAir
The CUAir team balances their plane's center of gravity in preparation for their early-morning mission flight during the competition. 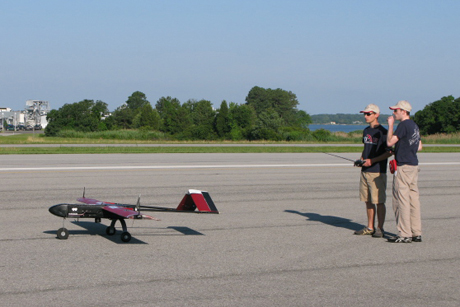 Provided/CUAir
A safety pilot and spotter prepare the CUAir plane for takeoff. The remote controller is only for takeoff and landing; otherwise the plane flies autonomously. The controller can also be used to take back control of the plane if it is acting unsafely.

About 30 Cornell students from mechanical and aerospace engineering, computer science, electrical and computer engineering, and other disciplines designed and built an unmanned aerial vehicle. The aircraft executed fully autonomous flights over a grid programmed by the students.

CUAir ranked first in the flight contest – half of the total score – and in the team’s written portion describing the design and system integration. The team elected to perform manual takeoffs and landings, sacrificing points but gaining focus on the autonomous flight, target acquisition and networking. Cornell’s team had a 30-minute flight, and its unmanned air system was the only one of the 36 contestants to identify all stationary marks.

“Everything pretty much went exactly as we expected,” said student team leader Phillip Tischler ’13. “It’s a very difficult competition because there’s a lot involved. We use such complex equipment that it’s hard to set up and get perfect. A key part is just being able to do what you practiced. … The way we see it, the core mission matters most, and that’s what judges favor.”

The Association for Unmanned Vehicle Systems International hosts the annual competition. CUAir has participated in this contest since 2003, when the team also finished first overall. In 2012, the team placed second overall and took the top score in the flight competition.

The Cornell students’ consistent success at the competition is even more impressive given recent technological advances in the field, said faculty adviser Tom Avedisian, professor of mechanical and aerospace engineering.

Avedisian explained: “Unmanned air systems technology has evolved considerably over the past 10 years, with current capabilities that were almost unthinkable in the early years of development. It’s much more sophisticated now, and the competition more challenging.”

Robert Emro is assistant director of marketing and communications for the College of Engineering.