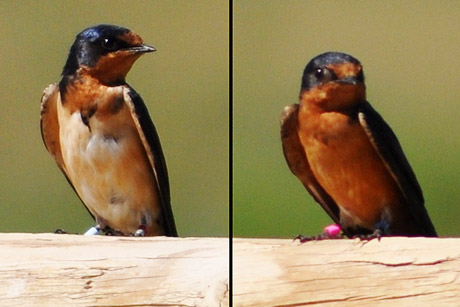 Courtesy of Matt Wilkins
This image shows natural variation in breast feather color in barn swallows. Studies have revealed that darker males and females have physiological benefits from being more "attractive."

A new study of female barn swallows has found that the birds with darker breast feathers – both naturally dark and artificially darkened (with markers) – experience less cell damage than lighter ones.

“The appearance of an individual may have an underappreciated influence on his or her physiological state,” said Maren Vitousek, lead author of the paper published Aug. 21 in the Royal Society’s journal Biology Letters. Vitousek is a senior research associate in the Department of Neurobiology and Behavior at Cornell, though she conducted the study as a postdoctoral researcher at the University of Colorado at Boulder.

Specifically, the artificially darkened birds experienced a drop in oxidative damage – cellular stress that occurs when highly reactive free radical molecules react with other molecules in cells. Free radicals are unstably charged atoms or molecules that can strip electrons from other nearby molecules to achieve stability. The cumulative damage created by free radicals is known as oxidative stress; such stress can impair protein, fat and DNA when defenses are low.

In a 2008 study, Rebecca Safran, Ph.D. ’05, an assistant professor of ecology and evolutionary biology at UC-Boulder and co-author on the new study, showed that darker male barn swallows, including artificially darkened ones, had increased testosterone levels. Other studies have also found that naturally darker males and females are more successful reproductively.

In the current study, the researchers also found that artificially darkened females experienced a drop in testosterone, opposite to the effect in males.

“We haven’t yet looked at the effect of color on social interactions, but we believe darkened birds are being reacted to differently by other birds [swallows], which is feeding back to influence hormonal and physiological states,” Vitousek said. She plans to explore how darkening is linked to health and behavior. In her lab, Vitousek studies behavioral adaptations and endocrine mechanisms that enable individuals to cope with stress.

The researchers captured 60 female birds in Boulder and Jefferson counties in Colorado in spring 2009. Half the birds’ breasts were darkened with a nontoxic marker to mimic the natural colors of the darker birds. The other half served as controls. Before being released, blood was drawn to measure testosterone, oxidative damage and antioxidant levels. They were then set free to establish territories and find mates. One to two weeks later, 17 of the control birds and 19 of the artificially darkened birds were recaptured and their blood retested, before being released again.

Rosemary Stewart, a research associate at Indiana University, is also a co-author of the paper.

The study was funded by the National Science Foundation, the Max Planck Institute and the University of Colorado.