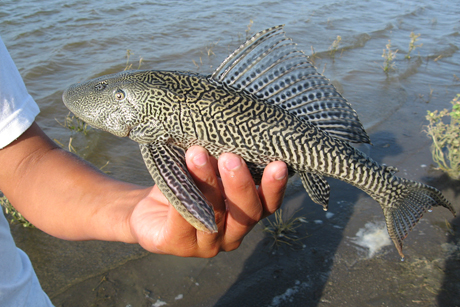 Krista Capps
A pleco caught in the Chacamax River in Chiapas, Mexico.

A new Cornell study, published Aug. 21 in the Proceedings of the Royal Society B, explains why the invaders, when they become abundant in non-native waters, can change the structure and function of ecosystems.

The fish, in the family Loricariidae, are marketed as “plecos” or “algae eaters” and are popular in the multibillion-dollar pet industry. Several species of loricariids, also known as sailfin catfishes, have become established outside their native ranges after aquarium owners let them loose in warm fresh and brackish waters. In several countries, sailfin catfish invasion has been linked to the decline of freshwater fisheries.

The study finds that the bottom-feeding catfish eat detritus and algae and absorb high quantities of phosphorus to maintain their bony skeletons, which can sequester phosphorus for more than a decade. Phosphorus is key to the growth of algae, which is the base of the food chain. This means invading organisms, such as plecos, that alter nutrient dynamics can change food availability in a system and affect all other organisms that depend on those resources. Invasive plecos have caused problems for people who rely on other fish as a source of protein and income in Central America, Asia and the Caribbean.

The study was conducted in a river in Chiapas, Mexico, where the researchers’ analyses determined the mass balance of elements in the ecosystem. They measured where and in what ratios nitrogen and phosphorus are stored and how these nutrients moved through the ecosystem after a pleco invasion.

“By examining the body chemistry of plecos and the chemistry of the system they are invading, we found that these fish have the ability to fundamentally change how the system works,” said lead author Krista Capps, Ph.D. ’12, a postdoctoral research fellow at the Maine Sustainability Solutions Initiative. She conducted the work for her Ph.D. thesis in the lab of co-author Alex Flecker, Cornell professor of ecology and evolutionary biology. “Relatively few studies have measured the way in which aquarium invaders affect ecosystem processes, such as nutrient dynamics,” added Capps, whose experiments in Mexico showed that aquarium invaders, even the ones that eat algae, can have major effects on ecosystem function.

The study could serve as a model to help predict which species will negatively affect ecosystems. An initiative, Habitattitude, is ramping up to develop partnerships among the pet industry, Sea Grant programs, state governments and the U.S. Fish and Wildlife Service to educate consumers in the United States, Capps said. Companies like Petco now supply educational pamphlets when aquarium fish are sold. Also, several states prohibit the sale of aquatic organisms that may negatively affect local ecosystems, and regulators and wildlife professionals in countries such as Australia and New Zealand have begun to address issues related to the ornamental fish trade, Capps said.

“My hope is that this work will stimulate a discussion to think outside the box as to how regulations are made,” Capps said.

The research was funded by the National Science Foundation; the Integrated Graduate Education and Research in Biogeochemistry and Environmental Biocomplexity Small Grant Program and the Margaret Paul Graduate Fellowship in the Life Sciences, both at Cornell; and the Fulbright-Hays Doctoral Dissertation Research Abroad Program.