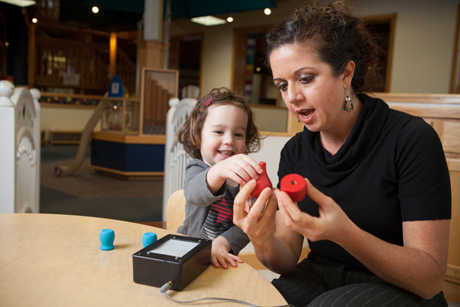 Lindsay France/University Photography
Tamar Kushnir works with a child as part of a partnership between ECC and the Ithaca Sciencenter.

For parents, getting kids to share their toys can be a constant battle, and compelling them to hand over their favorite doll or truck rarely works for long. New Cornell research suggests that allowing children to freely choose to give valuable possessions to another leads them to share more in the future.

The findings, by Nadia Chernyak, a graduate student in the field of human development, and Tamar Kushnir, the Evalyn Edwards Milman Assistant Professor of Child Development in the College of Human Ecology, are published in a paper, “Giving Preschoolers Choice Increases Sharing Behavior,” in the journal Psychological Science.

Their studies suggest that sharing when given a difficult choice leads children to see themselves in a new, more beneficent light – one that makes them more likely to act in a sharing manner in the future.

“Making difficult choices allows children to infer something important about themselves: In making choices that aren't necessarily easy, children might be able to infer their own prosociality,” Chernyak said.

Later on, all the children were introduced to Ellie, another sad puppet. They were given the option of how many stickers to share (up to three) to cheer her up. The kids who earlier made the difficult choice to help Doggie shared more stickers with Ellie. The children who were initially confronted with an easy choice or who were required to give their sticker to Doggie, on the other hand, shared fewer stickers with Ellie.

“You might imagine that making difficult, costly choices is taxing for young children or even that once children share, they don’t feel the need to do so again,” Chernyak said. “But this wasn’t the case: Once children made a difficult decision to give up something for someone else, they were more generous, not less, later on.”

Another experiment supported these findings, illustrating that children are more generous after choosing to share valuable toy frogs compared to worthless shreds of paper. Those who initially shared the frogs with Doggie shared more stickers with Ellie later on. Those who readily shared the paper, on the other hand, shared fewer stickers with Ellie. Therefore, children did not benefit from the mere act of sharing, but rather from willingly sacrificing something of value.

“Children are frequently taught to share, be polite and be kind to others. In order to bring us closer to figuring out how to best teach children these skills, it is important to know which factors may aid in young children’s sharing behavior,” Chernyak said. “Allowing children to make difficult choices may influence their sharing behavior by teaching them greater lessons about their abilities, preferences and intentions toward others.”

The research was supported by a Cognitive Science Fellowship from Cornell.