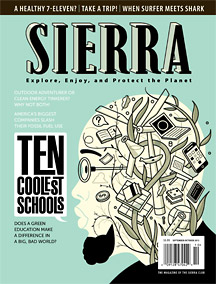 For the first time, Cornell University ranked fifth among Sierra magazine’s Ten Coolest Schools in the country, earning that spot for the environmental mindset on campus.

In the September/October issue, Sierra, the official magazine of the Sierra Club, cited more than 300 classes where Cornell students can learn about sustainability, as the editors explain that Cornell is one of the few universities where students can minor in climate change.

“A single class or professor can turn a life verdant,” writes Sierra lifestyle editor Avital Andrews. “Spending four years in a place that grows its own organic food, runs on alternative energy, composts, limits cars and pursues goals like carbon neutral or zero-waste leaves an imprint.”

The Sierra editors noted that Cornell greenhouse gas emissions have dropped 25 percent and that about $45 million will go toward energy conservation projects. The editors mentioned the two gorges running through campus, the 35-acre Botanical Garden at Cornell Plantations and the 100-acre Floyd R. Newman Arboretum.