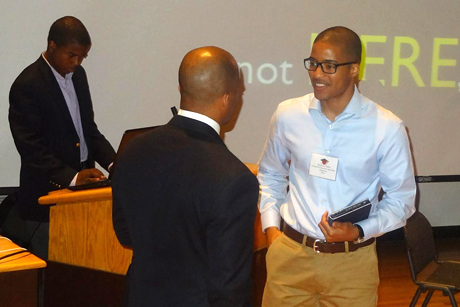 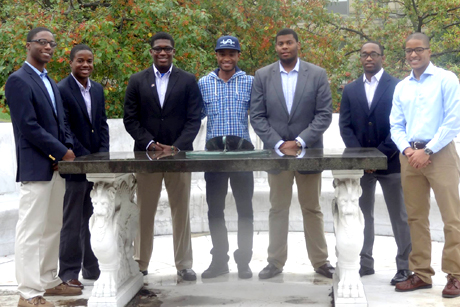 From the fear of failing a family back home to coping with social demands on campus, a Sept. 14 event addressed the concerns and hopes of Cornell’s African-American male students.

Scholars Working Ambitiously to Graduate (or SWAG) is a campus organization that seeks to boost the graduation rate of Cornell’s black male students. The event, “Navigating First-Year Challenges, Achieving Four-Year Success,” was designed to open a dialogue between first-year students and upperclassmen on navigating Cornell as men of color.

Aiming to prepare the freshmen for experiences that could be outside their comfort zones, moderator Channing McNeal ’14 asked the panelists to address the nonacademic pressures they faced upon entering Cornell.

“It was a bit of a power struggle actually,” said panelist Cameron Younger ’14, a native Ithacan. “I went from being a token black child of Ithaca where pretty much everyone knew who I was wherever I walked, to then being around all these guys who came from … all across the country, who were all on the same level. I was no longer special.”

Ulysses Smith ’14, president of Cornell’s Student Assembly, addressed his struggle as a person of color in the LGBT community and how he was shunned from both groups. He later said that it “forced me to really engage with people in other communities across campus. It enabled me to really learn how to learn and develop the tools to talk across difference. I was able to find a support system of peers, staff and administrators that have really helped me to flourish here.”

The problem of finding one’s own community or niche on campus was a familiar struggle to panelist Aaron Hancock ’15, who said that he almost decided to transfer the spring of his freshman year.

“I didn’t feel like I had that person I could confide in.,” he said. “I was really able to combat that through my SWAG mentor … being able to have that big brother here on campus played a huge part in keeping me here at Cornell.”

When McNeal asked the panelists to describe what force motivates them to succeed at Cornell, Hancock noted that his father grew up with absolutely nothing and later started his own company to provide a better life for his children. McNeal said that he was known as the “Ivy League student” among his friends at home, who were not provided with the same opportunities he had.

“What excuse do I have to be here and not do incredible things? It’s like a slap in the face to be provided with such resources and then not do something with them. I don’t have the right to have what I have and not do good things with it,” McNeal said.

Panelist William Jackson ’14 said that expectations from home were his driving force to succeed. “Probably back home with your families and cousins who look up to you, they see another black face doing something really well, and I just don’t want to let my family down. I know they’re looking to me to do great things.”

Concurrently, SWAG sponsored a panel on helping returning students take advantage of the resources and opportunities at Cornell. Keynote speaker Luvelle Brown, superintendent of the Ithaca City School District, discussed his experiences as a black male in the educational system, and consultant/coach Jullien Gordon delivered a talk on maximizing one’s potential in school and about knowing the value of your worth.

“SWAG’s mission and leadership are getting to the heart of the matter: Mentoring, community support and positive role modeling all contribute to stronger academic outcomes and a high-quality campus experience,” said Renee Alexander, associate dean of students. “This is what we desire for all of our students.”

Mark Ezzo ’14 is a writer intern for the Cornell Chronicle.