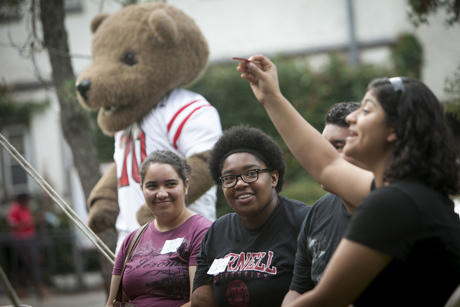 The freshman biology major had a full scholarship to Penn State when she received her Cornell acceptance letter and an invitation to Cornell’s Diversity Hosting Month (DHM) last spring, which her parents urged her to attend.

“I still was not interested when I arrived in Ithaca,” the Rockville, Md., native said.

Then a student and her friends “took us on a personal tour of campus and you could see the tremendous amount of love they not only had for their community but also for each other. They didn’t seem like friends; they seemed like sisters. … I got a real sense of community from the rest of the school also.”

Yeboah’s decision to attend Cornell based on that visit illustrates the university’s success in increasing diversity among new students enrolling each year. Diversity Hosting Month in April is a student-run initiative to recruit minority prospects and welcome them into the Cornell community. The student organization CU IMAGE (Cornell University Increasing Multicultural Admissions and Gains in Enrollment) welcomes and hosts more than 350 admitted students during DHM.

“One of my closest friends at Cornell was the other newly admitted freshman I roomed with [during DHM],” Yeboah said. “We would have never gotten so close if it were not for diversity hosting.”
About 75 students who participated in DHM in April attended a welcome barbecue Aug. 31. Hosted by the Undergraduate Admissions Office, the event also inspires future participation by student hosts.

Amiri Banks ’17, a biology major and German minor from Atlanta, said he was “only curious about Cornell’s potential as a fit for me when I came in April. However, the beauty of the environment, sheer enthusiasm of everyone, and appeal of the prestige basically cemented my decision in just two short days.”

“The overall growth in enrollment of underrepresented minority students is transforming the campus in incredibly positive ways, and bringing the Cornell community a step closer to Ezra’s vision of any person, any study,” said Jason Locke, interim associate vice provost for enrollment.

Cornell defines an underrepresented minority as “an American Indian or Alaska Native, Black/African-American, Native Hawaiian/Pacific Islander, or any combination” thereof, and “all students of Hispanic/Latino ethnicity, regardless of race.”

The number of URM students in the freshman class has increased by more than 57 percent over the past decade, Locke noted.

Vice Provost Barbara Knuth noted that Cornell’s commitment to diversity is embodied in the university’s Toward New Destinations initiative and its diversity principles: composition, engagement, inclusion and achievement.

“Compositional diversity begins with a student body whose demographics reflect those in the larger society, so it is important that we are recruiting such a diverse undergraduate class,” Knuth said. “Engagement and inclusion begin with steps to welcome and create social networks for all of our students. I’m delighted that the undergraduate admissions community, including our student ambassadors, has provided such a warm welcome to our newest students.”

“It was incredible to see the amount of students that accepted the invitation to attend DHM and later Cornell,” he said. “When I visited as a prospective student, the people that I met played a big role in my decision to attend. I just hope to make a difference by being that influential person that helps another prospective student find their success here.”