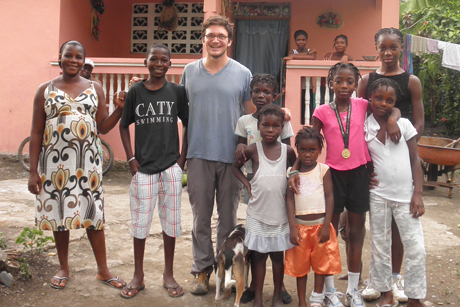 Cornell researchers, students and alumni are working alongside aid agencies in Haiti and Kenya to transform the humble peanut into a lifesaving legume.

Packed with protein, fats and fiber, peanuts are nutritional powerhouses that have helped save the lives of malnourished children. But they can also harbor deadly aflatoxins, a byproduct of fungal infection which, when metabolized in the body, can cause liver cancer, disrupt immune function and induce protein deficiency syndromes.

Most healthy people detoxify aflatoxins through their urine. But individuals who are malnourished or have Hepatitis B are especially susceptible to the adverse chronic effects of aflatoxins.

Dan Brown, Ph.D. ’81, associate professor of animal science, was contacted in 2006 by the nonprofit organization Meds and Food for Kids (MFK) as they were developing a ready-to-use peanut butter-based therapeutic food, Medika Mamba, in Haiti. He tested samples of the locally sourced peanuts and found aflatoxin levels of 1,500 parts per billion.

“You can’t legally feed an American dairy cow more than 20 parts per billion, so this was way above what you should be feeding to babies,” Brown said.

Bryan Sobel, M.S. ’13, recently joined the Cornell contingent in Haiti, working with fellow graduate Jamie Rhoads, M.S. ’08, as a research and extension programs specialist for MFK. Sobel, who once worked in the nursery industry and studied agroforestry with associate professor of horticulture Ken Mudge as part of his graduate studies, hopes his hands-on background in agriculture will allow him to adapt well to Haiti’s dynamic agricultural systems. He also has experience abroad, working in Rwanda to help villagers cultivate gourmet mushrooms and in Bangladesh to incorporate sustainable practices among indigenous farmers in difficult terrain

Sobel said he plans to identify peanut growers who are successfully avoiding aflatoxin contamination of their crops and promote their innovative principles among fellow farmers.

“It’s more of a horizontal transfer of knowledge, rather than a top-down approach,” he said.

As graduate student Jeremy Schwartzbord has learned, you also need a plan for the bad peanuts.

“They can fall into the hands of people who are hungry enough to eat them, or desperate enough to try to sell them on,” he said.

The environmental toxicology Ph.D. candidate has visited Haiti three times and recently returned for a six-month stint thanks to a grant from the U.S. Borlaug Fellows in Global Food Security Program. Although many more officials and commercial processors are now aware of the dangers of aflatoxins, Schwartzbord found that word has not reached peanut growers, who are among Haiti’s poorest farmers and whose crops are at higher risk of contamination because of lack of fertilizer and irrigation during cultivation and poor storage after harvest.

Schwartzbord and Brown’s latest objective is to devise alternative uses for peanuts with elevated aflatoxin levels. Combined with shells from good peanuts and cassava starch paste, they can be used in place of wood to cook food. Mildly contaminated peanuts can also be mixed with a clay that binds the toxins and can be fed to livestock. Contamination can also be treated with ethanol or, as Schwartzbord discovered during a trip to a local distillery, moonshine.

“Working in a place like Haiti, where resources are limited, a lot of creativity is required,” Schwartzbord said.

Brown’s efforts have also extended to Kenya, where several outbreaks have killed hundreds of people, and closer to home, where corn supplies are also at risk of aflatoxin contamination. Funding from the Cornell University Agricultural Experiment Station’s USDA Hatch funds is allowing him to investigate potential transfer of aflatoxin within the New York dairy industry.