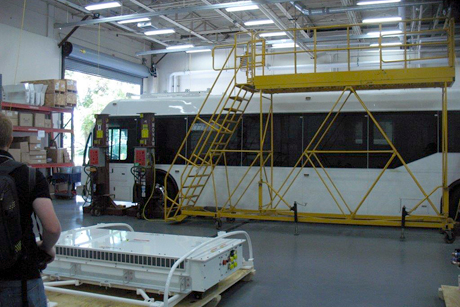 A new hydrogen filling station – nestled in Ithaca – could help to activate a new, national energy economy, since automakers plan to begin selling fuel-cell cars by 2016.

Importantly, Ithaca will get its first hydrogen filling station, which the general public can use.

“Driving emissions-free should be easy,” said Paul Mutolo, director of external partnerships for Cornell’s Energy Materials Center and the co-founder of the Standard Hydrogen Corp., Ithaca. Once the station is in place, Mutolo’s company will supply the hydrogen for the TCAT bus and other vehicles. “With new technologies, there should be no range anxiety or upstream emissions, and we should enjoy improved economic and environmental benefits. To get there, we need to start working now toward a smooth transition beyond oil-based fuels.”

Beyond demonstrating a bus that uses hydrogen, this is an opportunity to move the hydrogen economy forward, explains Mutolo. “While the TCAT bus will be the first customer for the hydrogen filling station, we believe it will benefit the region economically since the filling station can enable other fuel cell-based customers,” he said.

Mutolo, TCAT and BAE Systems of Endicott, N.Y., a manufacturer of hybrid propulsion systems, all developed the federal proposal. In addition to the TCAT bus, BAE is helping to build a next-generation fuel cell bus for Sunline Transit Agency in Thousand Palms, Calif., and the Greater Cleveland Regional Transit Authority in Cleveland, Ohio.

“This is exciting news for TCAT to be on the leading edge of new cleaner technology that is important not only for our organization, but for our country,” said Alice Eccleston, TCAT assistant general manager, at the announcement last week. “Reduction in the use of fossil fuels is critical to both our economic and environmental well-being,” she said.

Said Doug Swarts, TCAT service development manager: “We are looking forward to the day that we can dispatch the hydrogen cell bus and, hopefully, turn some heads.”

Cornell is a funding partner of TCAT with the city of Ithaca and Tompkins County.