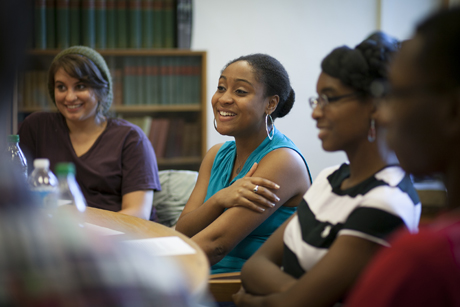 The Mellon Mays Undergraduate Fellowship Program, which aims to boost the number of faculty members from groups underrepresented in higher education, celebrates its 25th anniversary this year.

Open to those committed to increasing diversity in higher education, including historically disadvantaged groups such as Native Americans, Latino and African-Americans, the program provides financial and academic support for undergraduates planning to pursue doctoral degrees in selected fields, particularly in the humanities and social sciences.

Says Margo Crawford, program faculty director and Cornell associate professor of English: “The program is tied to a crucial transformation of the academy. It empowers students from underrepresented groups to become some of the most active scholars and teachers in higher education.”

The Mellon Mays program began in 1988 at eight universities and colleges around the country, including Cornell, where the program was restructured in 2004. Since 1988, approximately 31 percent of the 122 students in Cornell’s program have gone on to graduate school; 14 fellows have earned a Ph.D., and 24 are currently in graduate school. All but one of last year’s graduating fellows will start graduate programs in the fall, and the fourth fellow plans to enter a program soon.

“We invest a lot of time in them as undergraduates, and because they’ve been incredibly well-trained they go on by and large to have really excellent graduate careers,” says Maria Davidis, assistant dean of advising in the College of Arts and Sciences. As an example she points to one of Cornell’s first Mellon Mays fellows to earn a Ph.D., Dylan Rodriguez ’95, professor and chair of ethnic studies at the University of California, Riverside.

Up to five students are chosen at the end of their sophomore year to enter Cornell’s program. Working with an adviser, each fellow develops, researches and writes a 25- to 35-page scholarly paper by graduation. These projects are intended to help students develop graduate-level research and writings skills; in two years, the students complete the equivalent of a semester’s work in graduate school. The preparation is particularly valuable in an increasingly competitive job market, notes Crawford.

“I’ve gained a lot of insight into what a career in the academy might look like and what types of benefits and compromises might come along with it,” agrees Mellon Mays fellow Anna-Lisa Castle ’14.

“One of the exciting things that we see in our students is the interdisciplinary nature of their research,” says Davidis. “For example, we have students who are majoring in English but approaching it with an anthropological method. It’s exciting to see them as they grow intellectually and figure out where they want to be situated.”

The program holds monthly meetings, which provide more than camaraderie, important as that is, says Crawford. The meetings are conducted as seminars where students’ projects undergo peer review. “Our fellows benefit from the interdisciplinary space we create at these meetings. They have to step outside the jargon and explain why their topic is important and what it means.”

Crawford was a Mellon Mays fellow herself, at Swarthmore College. “I’m delighted to be able to help fellows to see the joy and wonder of being a professor and to share my experience with them,” she says. “Having been a fellow, I see how important it is for me as a professor of color to be involved in ongoing advising, mentoring and nurturing undergraduate students.”

A 25th anniversary celebration is planned for spring 2014. “We will be celebrating the success of the program, including the books and articles written by fellows, and the teaching, mentoring and leadership the program has produced. We will also honor Maria Davidis’ vital role, with Eric Cheyfitz, in the full restructuring of the program in 2004 to the great success it is today,” says Crawford.