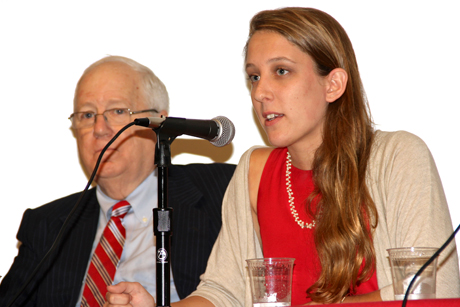 Linda McCandless
Alyssa Pritts '15, right, believes education at many levels is the answer to Ken Quinn's, left, challenge about policy recommendations to G20 leaders that could improve food security. 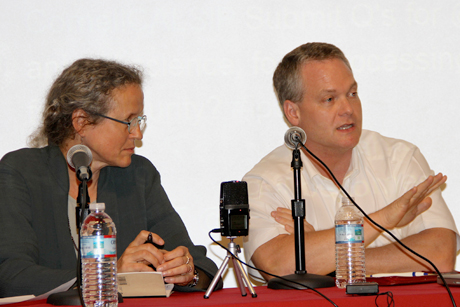 Imagine you had to outline the single most critical policy recommendation regarding agricultural development that G20 leaders could adopt to sustainably feed the 9 billion people who will inhabit Earth by 2050.

Answers given to the nearly 200 Cornell students, faculty and staff crowded into Cornell’s G10 Biotech Building for three panel discussions were as diverse as they were optimistic.

Alyssa Pritts ’15, a development sociology and international development major and 2011 Youth Institute alumna, who spent the summer interning at an orphanage in Guatemala, cited the critical value of education as a tool to alleviate hunger and food insecurity. She was optimistic about educating people “to more effectively, sustainably and efficiently use the resources they have to produce high-quality fruits and vegetables; to value new technologies and practices like GMOs and hybrid seeds; to revalue old technologies and practices like biochar; to inspire innovation; and to promote more informed decisions about health, food choices and the importance of community development.”

Alden Morris, a SUNY College of Environmental Science and Forestry student, would want the G20 leaders of the world’s richest countries to focus on food efficiency and food waste. “With underdeveloped countries in particular, we need to encourage more efficient technologies for food production, packaging and distribution,” he said.

Cynthia Ulbing, a student at Ithaca College, who spent the summer in Beijing, believes the G20 should focus on redistributing resources and food. “We have enough food,” she said. “The problem is where that food is going and how it is distributed. Almost 40 percent of the food produced in the U.S. gets thrown away, and 30 to 40 percent of the food in developing countries is spoiled in transit or storage.”

Agronomist Pedro Sanchez ’62, M.S. ’64, Ph.D. ’68, of Columbia University, would tell the G20 to make a “world compact to double or triple food crop yields worldwide, improve micronutrient nutrition and ensure efficiency across the entire food value chain from the soil to the stomach.”

Soil scientist Colin McClung, M.S. ’49, Ph.D. ’50, who won the World Food Prize for his work in the Brazilian Cerrado, said he would focus on “improving the world’s soils to produce more food.”

At a journalists’ panel focused on “Finding the Food Security Story,” several reporters talked about their work putting the face on stories about food security, focusing on people who do or don’t have access to food and the changing faces of agriculture. A third panel featured five Cornell scientists discussing “Food for the Future: Where Are We Going and How Do We Get There?” They outlined the future challenges and innovations particular to their disciplines.

The event was hosted by International Programs in Cornell’s College of Agriculture and Life Sciences (IP-CALS) as part of the yearlong celebration of IP-CALS’ 50 years of international engagement.