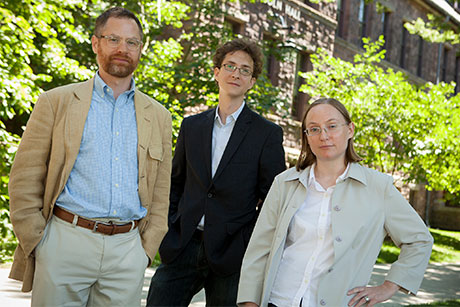 The arrival at Cornell of three medieval cosmology scholars in the last three years has created a rare density of expertise in the topic, and they have launched a collaboration to take a closer, interdisciplinary look at complex cosmologies and the medieval reception of ancient science.

Cosmology is usually defined as the search for order in the universe. But in the medieval world, the production of cosmologies had direct implications for religion, politics and social ideology.

“Medieval cosmology is a massive and in some cases arcane body of material, and the amount of effort it takes to master a little bit of it is substantial,” says Benjamin Anderson, assistant professor of the history of art. “The working group is a fantastic opportunity to work with people who have been exploring other corners of this material and to pose questions that we wouldn’t be able to address without that pool of expertise.”

The new medieval cosmology working group launches this fall with a seminar and lecture series.

The seminar, “Medieval Cosmologies: Text, Image and Music,” will be taught by assistant professor of music Andrew Hicks and assistant professor of history of art Benjamin Anderson and is intended for advanced undergraduates and graduate students. It will look at dominant cosmological models in the medieval Mediterranean, considering their sources in Greco-Roman science, mythology, revealed religion, etc., as well as their expressions in literature, art and music.

The lecture series, supported by a faculty innovation grant from the Cornell Institute for European Studies, will bring three speakers to campus. Alexander Jones, a scholar of Ptolemy, Greek science and cosmology from New York University, will speak Sept. 12. University of Virginia art historian Eric Ramírez-Weaver will speak Nov. 7; his specialties include Carolingian cosmology and cosmological diagrams. Finally, Jamil Ragep, a McGill University specialist in the history of medieval Islamic science, will speak Nov. 21. All lectures will take place at 4:30 p.m. in G22 Goldwin Smith Hall.

The new working group – founded by Anderson, Courtney Roby and Andrew Hicks – will provide a hub for work done on medieval cosmology in New York state and its environs, and offer an intellectual community where scholars can present works in progress and get constructive feedback. A lecture series and seminar are planned for this fall.

“It’s very productive to have someone to bounce ideas off of, to hear what’s working in a different subject area or time period,” agrees Roby, an assistant professor of classics. “Authors we each read keep running into the same problems, so it enriches our understanding of the problems and how they look, refracted through different time periods.”

Hicks, an assistant professor of music, says, “We’re trying to make the seminar, working group and lecture series as rich as we can by treating cosmology not just as a scientific discourse with its own technical history, but also as a world view that reflects and shapes aesthetic, political and ideological commitments more broadly.”

Hicks is an expert on the history of music theory as a scientific discourse in late antiquity and the early Middle Ages. He looks at how harmonic ratios were seen as structuring the ways in which the spheres in the cosmos move, the moral and physical equilibrium of our bodies, and even nature itself. He is working on a monograph that investigates how harmony was used in cosmological discourse from late antiquity to the 12th century.

Anderson’s research focuses on images of the spherical, Earth-centered cosmos as it was conceived in antiquity and in the Middle Ages. He compares early medieval artistic cultures, including astronomical iconography shared between the Islamic world, the Latin-speaking West and Byzantium. He is particularly interested in the political aspects of cosmological imagery, and studies the archaeology and architectural history of Anatolia. He is a founding member of the Cornell Institute of Archaeology and Material Studies.

Roby’s contribution to the working group is more scientifically oriented. Her research examines the compromises between rigorous math and real-world constraints, such as that faced by Roman surveyors deciding whether the standard for laying out a city should be interpreted as a vertical line or a stick in the ground. Her current book project looks at how those in antiquity turned the messy reality of mechanical devices into comprehensible text and focuses on Hero of Alexandria, the inventor of the so-called “steam engine” and an enthusiastic popularizer of science and technology.