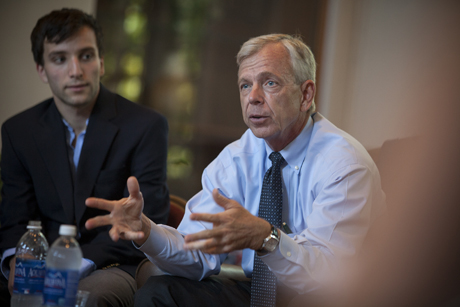 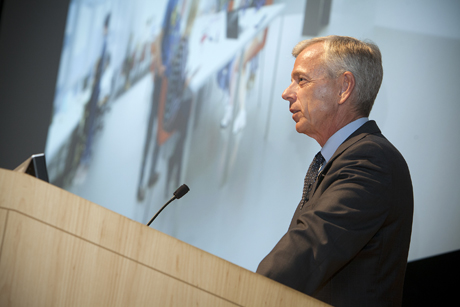 The times they are a-changing, and communications technology is driving a lot of the change – but we have to work to keep up.

“For all the progress we’ve made, we still have a long way to go,” Lowell McAdam ’76 told a full house in Statler Hall’s Alice Statler Auditorium Sept. 19, as he delivered the 32nd Hatfield lecture. McAdam, chairman and CEO of Verizon Communications and a Cornell trustee, spoke on “Tackling the World’s Biggest Challenges: The Future of Communications Technology.”

After reviewing the impact of earlier communications infrastructure, from railroads to the (wired) telephone, McAdam moved to the accelerating pace of change in the modern world. He drew laughs from the audience by running an old commercial for a cellular phone about the size of a brick that weighed “only” 31 ounces. Today, he reported, Verizon Wireless has 100 million customers in 150 countries. He recalled how the idea of touch screens was rejected by many because “people’s fingers will get the screen dirty.”

He cited Moore’s Law, which says that the power of computer chips will double about every two years, so the technology they drive will change at an exponential rate, adding new capabilities we will have to learn to use. Verizon, he noted, has major research underway – some of it in collaboration with Cornell – to leverage its high-speed wireless network, worldwide “cloud” data centers and fiber-optic networks for new applications.

In medicine, mobile devices are reminding patients of their required routines, while doctors can access medical data in the cloud. Communication can help conserve energy, McAdam said, describing a Verizon pilot project in Charlotte, N.C., to link cars with the transportation infrastructure to ease traffic and reduce fuel consumption. Mobile devices are among technologies being used in schools to help teach STEM (science, technology, engineering and math) subjects. “Sixty-five percent of children now in grade school will grow up to have jobs that don’t exist today,” McAdam said.

Some of what’s happening can be viewed as “disruptive technology” that will bring on unexpected change, he said, like the “Internet of things” that connects appliances to the network. By 2017 it is projected that there will be three connected devices for every person on the planet, he reported. Social networks are changing society, and with Verizon bringing fiber optics to individual homes, we are becoming “hyper-connected.”

But a challenge is that there are still millions of people worldwide who are not connected at all, he added.

In a follow-up question period moderated by Provost Kent Fuchs, McAdam reminisced about his experiences as a Cornell student and again reminded the audience, “Technology is ahead of applications.”

The Continental Group Foundation established the Robert S. Hatfield Fund for Economic Education at Cornell in 1980 to honor Robert S. Hatfield ’37, the retiring chairman, president and chief executive officer of the Continental Group Inc. Its purpose was to create a platform for the exchange of ideas between academic and corporate communities. Each year a distinguished business leader is invited to campus to meet with students and faculty and deliver a major address. The fund also supports faculty in teaching economics to undergraduates.