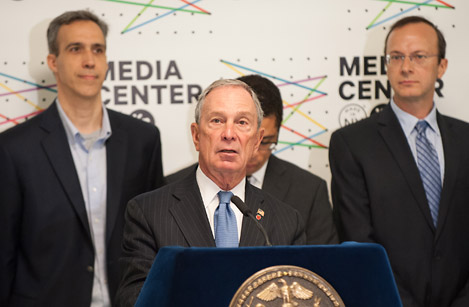 The two-year degree is designed to train the entrepreneurial engineers and technologists needed to drive the digital transformation of publishing, advertising, news and information, and entertainment.

Graduates of this dual-degree program will receive a degree from Cornell University and from Technion – Israel Institute of Technology.

“This novel program addresses the huge need for more tech talent in the media-related businesses that play such an important role in New York City,” said Daniel Huttenlocher, dean of Cornell Tech.

“The Jacobs Technion-Cornell Innovation Institute is organized around hubs focused on key New York City industries, and there is no better place to start than in the media space,” said Craig Gotsman, director of the JTCII. “We are aware of the critical need for deep tech talent to lead the digital transformation within the traditional and new media companies and are proud to be working with many of them in educating a new generation of tech professionals in this space.”

“New York City is the world’s media capital, but we can’t take that position for granted because the way media is produced and consumed is changing dramatically,” Bloomberg said. “Media creators and tech companies have a lot to gain from a strong, collaborative working relationship, and I am proud that Cornell and the Technion will be training the next generation of tech talent in New York City to work with the media industry. We will reap the benefits of that partnership in the form of job creation and global competitiveness.”

The JTCII – a key component of Cornell Tech – will offer a Master of Science degree in information systems, with a specialization in connective media. It is now accepting applications for studies to begin in fall 2014. The degree combines technical and social science and media industry expertise with an immersive semesterlong industry project and extensive engagement with digital media companies in New York City.

The JTCII also announced a series of corporate collaborators that will play a key role in the Connective Media hub, including The New York Times, Facebook, Hearst, Medium, Betaworks, Tumblr and WordPress. The collaborating companies will provide guidance to refine the curriculum that combines technology expertise at the level of a software engineer, computer scientist or data scientist, with media industry expertise at the level of product manager, product designer or editorial staff member.

“As we reimagine the media industry, one of our big obstacles is a shortage of skilled and experienced technologists who have deep technical expertise and also understand our industry," said Philip Wiser, chief technology officer at Hearst Corp. “That’s why we are excited to work with Cornell Tech on the new Connective Media program. The campus’s close collaboration with industry in tackling pressing problems ensures that students are prepared to have a powerful impact on our future.”

JTCII recently hired its first full-time faculty member in the Connective Media hub, Mor Naaman, who is an academic and an entrepreneur. His startup, Seen, helps make sense of the real-time Web by summarizing and organizing social media content. In his first year at Cornell Tech, Naaman will split time evenly between teaching and Seen.

Cornell Tech welcomed its first fall class of computer science Master of Engineering students last month to its temporary campus in space donated by Google at its headquarters in Chelsea. The Johnson MBA at Cornell Tech was announced over the summer and will enroll its first class in summer 2014. Plans are moving forward for the permanent campus on Roosevelt Island, set to break ground next year and open in 2017.