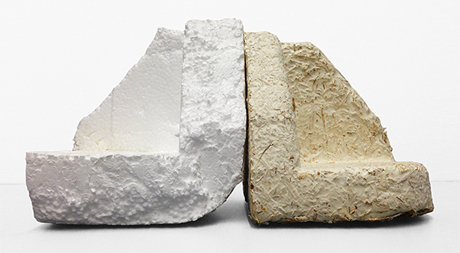 Move over, Styrofoam – there’s a new kid in town. Cornell students have developed a genetic circuitry-based tool that could improve the production of an environmentally friendly alternative to the plastic material.

Cornell University Genetically Engineered Machines (CU GEM), an undergraduate project team, took home a gold medal and the Best Human Practices Advance Award at the International Genetically Engineered Machines (iGEM) North American regional competition for their project that genetically engineers specific fungi. The fungi are used in the production of a biodegradable Styrofoam substitute to confer resistance to pathogenic molds that can compromise entire batches of the material during production.

CU GEM faced off against 50 universities from around the world at the competition, held Oct. 4-6 in Toronto. Cornell was selected to advance to the International Jamboree, which will be held at the Massachusetts Institute of Technology Nov. 1-4. 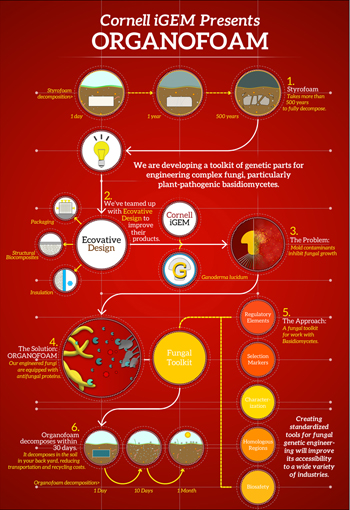 The gold medal was awarded for the team’s design, as well as their effective presentation of the project and its accessibility for other teams to use in the future. The Best Human Practices Advance Award recognized CU GEM’s efforts to work with a corporation and for the steps they took to guarantee that their project was safe and practical.

CU GEM uses genetic modification to develop biotechnological tools. This relatively new field, known as synthetic biology, applies engineering concepts to biological processes to find solutions to industry and economic problems.The project this year was inspired by the Albany-area company Ecovative Design, which uses fungi and plant matter to produce a biodegradable substitute for Styrofoam. CU GEM decided to help the company by addressing a production concern: When contaminated with pathogenic molds, the fungi would stop growing, ruining the material.

CU GEM realized that a genetic circuit – a design similar in concept to an electrical circuit in engineering, with specific genetic components used to perform a certain function – could solve this problem. However, there are no standardized industrial tools for engineering fungi. 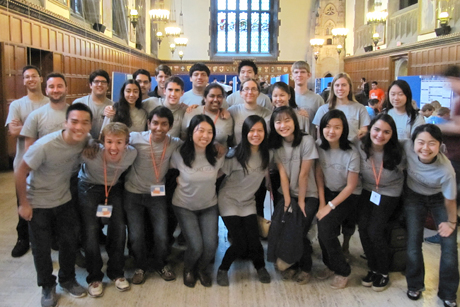 The CU GEM team’s solution was Organofoam: Genetically Engineering Fungal Mycelium for Biomaterials Development. Organofoam is a toolbox of genetic parts, including plant-pathogenic fungi that can confer mold resistance to the fungi that Ecovative Design uses in the production of its materials. In addition to improving the Styrofoam substitute, the CU GEM team hopes that their project can help to make fungal genetic engineering a tool for future sustainable technology developments.

Kara Beckman ’17 is a writer intern for the Cornell Chronicle.