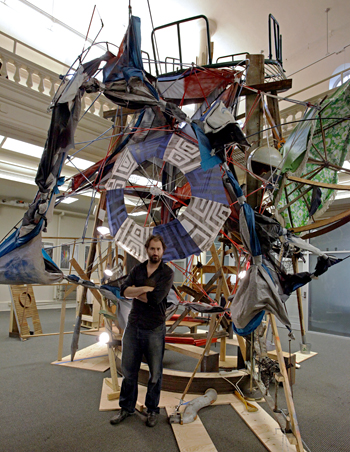 Dennis Maher, B.Arch. ’99, likes to surround himself with castoffs of the inhabited world.

His home in Buffalo, N.Y., The Fargo House, is an ongoing installation project and archaeological dig, filled with objects Maher has selectively collected, including birdcages, dollhouses, jewelry boxes and globes.

“Most of them are houselike in nature or are fragments of pre-existing houses,” he says. “[Their] outsides conceal a marvelous interior, as well as the residue of worn-out insides.”

He combines architectural and artistic practice in the house and its satellite exhibition “Common Cosmos: 287 F – 14213,” an installation in Sibley Dome through Dec. 20. The former Cornell Fine Arts Library is home to offices and study space for the College of Architecture, Art and Planning (AAP).

“I think about this as an architectural project – I am interested in how we live with and think about artifacts, and how they can suggest new kinds of spaces,” Maher says. “I work with objects in order to make us aware of the latent qualities of matter – history, surface texture, use values and color. I joke sometimes that I wanted to be a painter, but I don't paint. Instead, I produce new images of the world with matter.”

More than 15 feet tall, the central sculpture of “Common Cosmos” resembles a 3-D exploded-view diagram of the contents of a storage locker or barn: Pieces of chairs and tables; globes cut open to hold books and small knickknacks; a tabletop umbrella, a parachute, a trampoline and various household, architectural and industrial elements Maher has scrounged.

His primary interest, he says, is “the embeddedness in objects – there’s knowledge, and labor, and there’s time, and there’s energy.”

By combining, recombining and situating these random elements, Maher is investigating not only where they came from, but their potential to inform our imagination of houses and of cities. 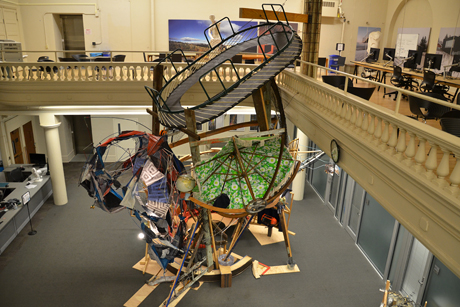 Dennis Maher
Maher says "Common Cosmos" reflects his interest in "how we live with and think about artifacts, and how they can suggest new kinds of spaces."

“The context of Buffalo has so actively influenced how I think about the work. It’s a city where the forces of demolition are so often pitted against the forces of preservation,” he says. “It’s almost like the scene of a battle, and the creative life of matter has to engage in the reality of everyday use. Preservation often wants to isolate and freeze something. I’m interested in drawing the life out of things.”

Built before 1900, Maher’s Fargo House was slated for demolition when he bought it from the city in 2009. Over the past four years he has transformed it, uncovering layers, cutting into its walls, ceilings and floors and attaching objects to them.

There’s “a room for books; a wardrobe room; a gallery room with folding screens and such,” he says. “I started to think about how living in that house might engage the life of objects; to reconcile the animate nature of things … I try to think of the house as living tissue.”

The installation includes smaller pieces, self-contained environments and microcosms of their own. One sculpture incorporates sieves and metal bowls – “pieces I thought would help me with the relationship with the dome at a larger scale,” Maher says.

“I think the work has a voice, a character and an intensity that’s really unique and visible,” AAP Dean Kent Kleinman says. “He has an understanding of how the details of the city – a city like Detroit, a city like Buffalo – can be rebuilt and reimagined in a spectacular way.”

Associate professor of architecture John Zissovici curated the exhibition; Maher’s students at the University at Buffalo and Danny Salomon, B.Arch. ’12, assisted with the installation.