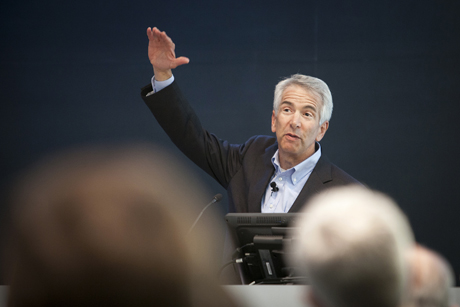 Regardless of continued efforts by the Environmental Defense Fund (EDF) and others to make the production of natural gas via “fracking” as clean and climate-safe as possible, not a single state is doing enough, according to EFD’s head.

“There still isn’t even one state that protects public health and the environment in ways I consider adequate,” said Fred Krupp, president of the EDF, in his talk “Climate Change and Natural Gas: Protecting our People” Oct. 22 in Milstein Hall. “No one should have to trade their right to clean air and clean water for the sake of cheap energy,” he said.

Particularly, Krupp said that he was concerned about methane leakages from the natural gas system. He cited the Intergovernmental Panel on Climate Change, for example, that reported that it increased its estimate of the climate impact of methane, now stating that methane is 34 times more powerful than carbon dioxide in trapping heat. To mitigate this environmental hazard, he said that the EDF has joined with the University of Texas to undertake 16 studies of methane emissions across the supply chain.

Krupp said the production of shale gas has increased 44 percent per year from 2007 to 2011. Because of the increasing use of natural gas, Krupp concluded, “we have an absolute obligation to make sure natural gas is produced in as clean and climate-safe a manner as possible.” EDF continues to fight to protect air and groundwater from pollution as well as the right of people in communities to know exactly what chemicals are being pumped through the ground.

“Today, more than 20 states require some disclosure, including Texas, Colorado, Wyoming and Pennsylvania,” Krupp said, but he noted that such disclosure is still far from adequate.

EDF has a history of working with corporations, Krupp said, including Walmart and AT&T to help them reduce their greenhouse gas emissions. Although proud of progress that has been made, Krupp, who has headed EDF for 29 years, said that natural gas development could be made much safer for the environment and climate. “Much more work needs to be done,” he said.

Nevertheless, Krupp stressed that more natural gas fracking is not the long-term solution: “Make no mistake: Our future lies with solar, wind, energy efficiency and other forms of low-carbon energy sources. I do not want to see more natural gas infrastructure built out.”

The talk was part of the Outside Voices Speaker Series, sponsored by Cornell’s David R. Atkinson Center for a Sustainable Future.