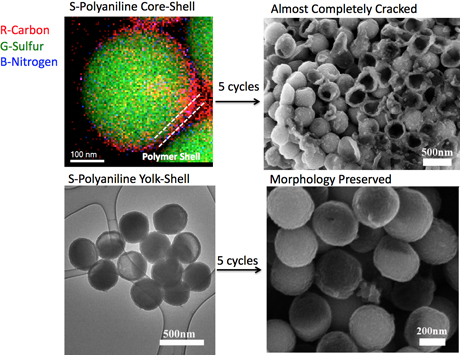 A pair of common kitchen ingredients inspired Cornell researchers’ improvement of the performance of lithium-sulfur batteries, a promising alternative to today’s lithium-ion batteries.

Two recently published papers, both originating from the lab of Hector Abruña, the Emile M. Chamot Professor of Chemistry and Chemical Biology, describe breakthroughs in the durability and performance of lithium-sulfur battery cathodes, one by using a component of corn starch, and the other, by modeling a nanocomposite material after the yolk-shell structure of eggs.

“There is currently a great need for high-energy, long-life and low-cost energy storage materials, and lithium sulfur batteries are one of the most promising candidates,” said Weidong Zhou, a former postdoctoral researcher in Abruña’s lab and first author on both papers, published online by ACS Nano on Sept. 5, and by the Journal of the American Chemical Society (JACS) on Oct. 10. “From electric vehicles to solar and wind power, applications for better lithium-based battery technologies are countless.”

“Lithium-sulfur batteries could potentially offer about five times the energy density of today’s typically used lithium-ion batteries,” said Yingchao Yu, Ph.D. student with Abruña, and co-first author on the JACS publication. “But a lithium-sulfur battery is not a stable system, as its capacity tends to fade over a short period of time.”

After about 50 charge cycles, the energy density of a lithium-sulfur battery decreases rapidly due to a phenomenon called the polysulfide shuttling effect, which is when the polysulfide chains in the battery’s cathode (positive end) dissolve in the electrolyte, the ionizing liquid that allows electrons to flow.

To combat this problem and stabilize the sulfur, the researchers used amylopectin, a polysaccharide that’s a main component of corn starch.

“The corn starch can effectively wrap the graphene oxide-sulfide composite through the hydrogen bonding to confine the polysulfide among the carbon layers,” said Hao Chen, co-first author of the ACS Nano publication and a former Ph.D. student in the lab of Francis DiSalvo, paper co-author and the John A. Newman Professor of Chemistry and Chemical Biology. “As an additive, it greatly improves the cycling stability of the battery.”

In another approach to improving lithium-sulfur battery durability, the researchers also published a new way to make lithium-sulfur cathodes by synthesizing a nanocomposite, consisting of sulfur coated with a common, inexpensive, conductive polymer called polyaniline, and modeled after the way an egg is encased in a shell but has room to move around inside. Similar sulfur-polyaniline composites have previously been synthesized in a “core-shell” structure, but the new method provides an internal void within the polymer shell, called a “yolk-shell” structure.

“When the  lithium-sulfur battery was fully discharged, the volume of the sulfur expanded dramatically to 200 percent. If you think about the beauty of an egg yolk, there is some empty space inside, with space for the yolk to expand,” Yu said.

The polyaniline coating, which chemically is a benzene ring with ammonium and strung into cross-linked chains, is also soft and flexible, and can protect against the “shell” cracking during long cycling.

Provisional patents for these innovations have been filed through the Cornell Center for Technology, Commercialization and Enterprise. A Cornell startup company called Lionano Inc. is now commercializing these technologies for the marketplace. Lionano is also commercializing advanced lithium-ion battery anode materials with three times the capacity, four times the durability, three times the charging rate and  one-fifth the cost of current anode materials, Yu said.

The papers, “Amylopectin Wrapped Graphene Oxide/Sulfur for Improved Cyclability of Lithium–Sulfur Battery” and “Yolk-Shell Structure of Polyaniline Coated Sulfur for Lithium-Sulfur Batteries,” were supported by the Department of Energy and the Energy Materials Center at Cornell, an Energy Frontier Research Center funded by the U.S. DOE. The researchers used the electron microscopy facility of the Cornell Center for Materials Research with support from the National Science Foundation Materials Research Science and Engineering Centers program.