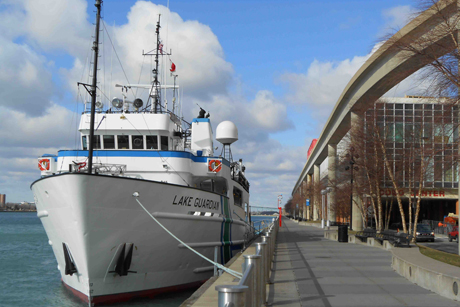 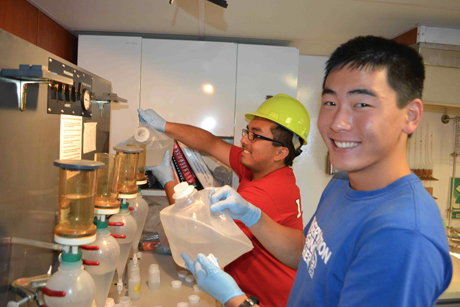 Cornell received three grants to collect data on the biology of the Great Lakes, information that continues long-term datasets and provides current measures for researchers, fishery managers and policymakers.

For starters, Cornell and Buffalo State College researchers have received a five-year, $3.5 million grant from the Environmental Protection Agency’s (EPA) Great Lakes National Program Office and the Great Lakes Restoration Initiative to survey lower trophic levels, or organisms at the bottom of the food chain that provide valuable insights into the health of higher species.

Specifically, Cornell researchers are using a 180-foot EPA research vessel to collect phytoplankton, zooplankton and mysid shrimp (crustaceans) levels in all of the Great Lakes, while Buffalo State researchers will head up collecting benthos (fauna from the bottom of the lakes) levels. Other researchers are also sampling for such pollutants as mercury, nutrients from farm runoff, viruses and bacteria.

The project continues work by the New York Department of Natural Resources (DNR) and the Cornell Biological Field Station (CBFS) to assess and research lower trophic levels in Lake Ontario, which started with the collaborations between Bob O’Gorman at U.S. Geological Survey (USGS) and Ed Mills at CBFS almost 30 years ago.

“Part of the reason we got this large grant was because of our history of collecting data,” said Lars Rudstam, professor of natural resources and the grant’s principal investigator. “Without the longer term dataset it is hard to determine changes in the Great Lakes.”

“We provide information to fishery managers that they use to decide how many fish they should stock and how much they should impose or relax fishing limitations,” said James Watkins, a postdoctoral researcher in Rudstam’s lab.

Data of lower trophic levels help researchers predict populations of larger fish, as plankton feed small fry, which in turn feed bigger fish. When levels of plankton drop, repercussions may be seen all the way up the food chain. For example, Pacific salmon have been introduced into the Great Lakes since the 1980s, but they crashed in recent years in Lake Huron but not in Lake Ontario, due partly to declining biomass at the base of the food web.

Cornell is also sampling a layer of water called the deep chlorophyll layer, at or below a steep temperature gradient known as the thermocline at around a depth of 15-25 meters. A long-term shift of algal primary producers from the surface layer to these depths may lead to vertical redistribution of zooplankton and higher trophic levels.

Rudstam and postdoc Milan Riha, research staff, one graduate student and three undergraduates took part in a weeklong sampling cruise of Lake Ontario in July. The undergraduates had been hired as summer interns at the CBFS at Shackelton Point, Bridgeport, N.Y., on Oneida Lake. Watkins and other staff sampled all the Great Lakes during monthlong cruises in April and August.

Two additional grants were funded by the Great Lakes Fisheries Commission and U.S. EPA Region 2, to continue similar sampling in Lake Ontario. These grants, one for $100,000 and another for $50,000, are part of a collaboration that includes the Canadian Department of Fisheries and Oceans, the Ontario Ministry of Natural Resources, the U.S. EPA, USGS, New York DNR and Cornell.