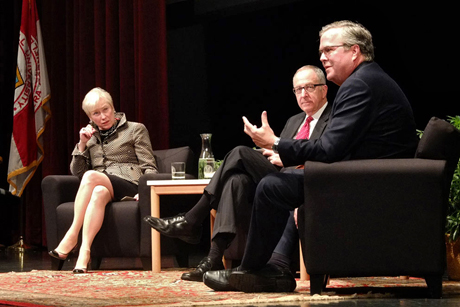 Half of Hispanic and African-American fourth-graders are functionally illiterate; only a quarter of students who take the ACT college assessment exam qualify as college-ready on all four sections; half of community college entrants require remediation to succeed in college classes.

These were some statistics cited during a talk on education by Jeb Bush, governor of Florida from 1999 to 2007, who spoke on campus Oct. 24 at the beginning of Trustee-Council Annual Weekend.

The event, “Education in America: What Do We Do Now?,” featured Bush’s keynote address, remarks by State University of New York Chancellor Nancy Zimpher, and a panel discussion with Bush and Zimpher moderated by Cornell President David Skorton.

“My idea for higher education reform is to radically transform how we educate at the earlier grades,” said Bush, who is chairman of the Foundation for Excellence in Education, a nonprofit organization based in Tallahassee, Fla.

“First we should begin with early literacy,” said Bush. “I do not understand the logic of promoting illiterate children from third grade to fourth grade,” when continued learning depends on their abilities to read, he said. “Illiteracy destroys lives,” he said.

He also advocated for more choices among schools. He said our education system “has been isolated from the very forces that have driven American innovation and success for more than two centuries. There should be more options for parents.”

Bush said we should embrace and foster digital learning in schools. “We need to make education relevant for 21st century kids, and that means communicating with them on their terms as digital natives,” he said. Forty-five percent of college students now take online courses, he added.

He also advocated for robust accountability of schools. “If you don’t measure, you don’t care,” he said. “If you have no consequence between failure and excellence, you’ll get less excellence … but schools do not generally have that kind of accountability.”

With regard to teachers, Bush said research shows that over a year, a good teacher will teach a year-and-a-half’s worth of learning, while a poor teacher will teach only a half-year’s worth of learning. He called for rewarding the best teachers by paying them better, remediating midlevel teachers and firing poor teachers. He also said schools of education at universities need to be evaluated “because they are not cutting it. Teachers are coming into classrooms unprepared,” he said.

Finally, he said, “high standards matter. It is the most basic element of reform. To compete globally, we need to raise the bar.” He advocated Common Core State Standards that are benchmarked for American students to compete with the best in the world.

Bush’s address was followed by remarks by Zimpher, who said that elementary and secondary education and higher education are legislated separately, making them “two bodies of work and policy that don’t statutorily connect.” She said to move forward there must be more collaborative ways to set policy at the federal and state levels.

She added that we could succeed through more partnering between university and K-12 educators, by reducing higher education costs, by creating opportunities so students have a better chance to complete their educations and by providing them with career experiences in college.

“The answer I think is no, I don’t think everybody should go to college, but everybody should have a right to go to college,” said Bush. He added that there should be the same standards for everyone so young people are not tracked away from higher education. “The effort is to be college-ready but career-oriented,” he said.

“I want to say that everybody deserves a right to be smart,” said Zimpher. Being smart is exactly what the Common Core is about, she said, preparing students to be successful in college by starting in elementary school. “I think that’s a pretty good idea,” she said.

The event was sponsored by the Cornell Republicans, with funding from the Triad Foundation, and co-sponsored by the College of Human Ecology, Cornell Institute for Public Affairs, the Departments of Policy Analysis and Management, of History and of Government, the American Studies Program, Cornell University Program Board, WVBR, Alumni Affairs and Development, Division of University Communications, and Office of Student and Academic Services.