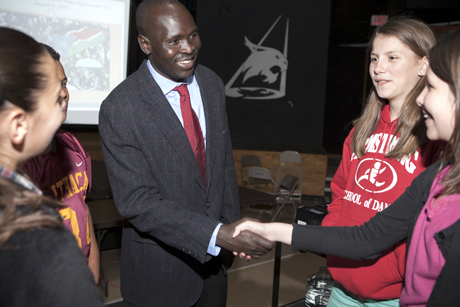 Ayuen Ajok, a graduate student in the Cornell Institute of Public Affairs, once was a Lost Boy of Sudan. As one of the 20,000 Sudanese children displaced from their homeland and separated from their families, he told students at Ithaca’s Boynton Middle School Oct. 21 that he was lucky to have survived.

In 1987 at age 5, his village was struck by an insurgent group from North Sudan led by Omar al-Bashir, who became president of Sudan in 1989 in a military coup. The attack left the majority of villagers dead or injured.

“I still recall the sound of the gunshots and the screams of the people begging for help. This was the first time in my life that I experienced and understood the meaning of fear,” said Ajok.

Like many other Lost Boys, Ajok walked the 1,200 miles to Ethiopia, where he was a refugee for four years until Ethiopian President Mengistu Haile Mariam’s regime was overthrown. Then the refugees were forced to walk hundreds of miles back to Sudan to another refugee camp. Constant attacks from the north forced them to flee for Kenya the following year.

“We walked to Kenya without food or water and witnessed thousands of us dying from diseases, wild animal attacks and dehydration,” said Ajok, noting that although he was a young child, witnessing death became a daily part of life.

One event in particular when Ajok was forced to leave Ethiopia to return to Sudan when Eritrea and Ethiopia went to war in 1991, however, scarred him for life, he said.

After walking nearly 500 miles to reach the Gilo River between Sudan and Ethiopia, “The heavens thundered, and torrential rain flooded the Gilo River,” he said. “The river was infested with crocodiles. At dawn, we were attacked by Ethiopian rebels who were overthrowing the government of Mengistu Haile Mariam, the dictator. The ambush left the people no choice but to jump into the river to get away. I watched in horror as thousands drowned or were eaten alive by crocodiles.”

At the Kakuma Refugee Camp in Kenya, Ajok started first grade; his roofless classroom was under a tree (classes were canceled when it rained), and the “blackboard” was the ground. He attended school throughout his eight years at the camp. “I knew education would provide me the ability to draw some meaning from the suffering in my life,” he told the students.

Ajok has used his past as fuel for the future. “Through all these painful moments in my life, I knew that someday I would find happiness. Indeed, my past is what has kept me going in life.”

Ajok came to the United States in 2000, where he attended high school in Lansdale, Pa. He graduated from Temple University in 2008 and in 2011 earned a master’s degree in international peace and conflict resolution from Arcadia University. After he receives his MPA from Cornell, expected in 2015, Ajok said that he plans to return to Sudan to help strengthen the infrastructure of the nation and to work with international organizations that contribute to the development of his country.