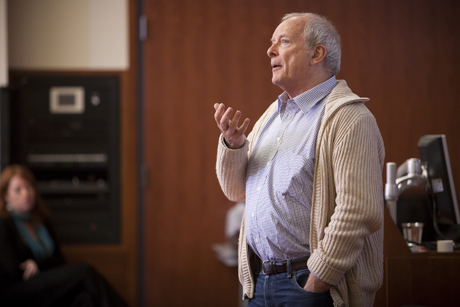 Understanding the musicality of the past can enrich the musical life of the present, said Christopher Hogwood Oct. 25 in his first visit to campus as an A.D. White Professor-at-Large in a talk titled “The Past Is a Foreign Country: Why Making Music Matters.”

“To help in that thesis, I would call upon the fact that now for the first time we are really the first group of people who can draw on more than a century’s worth of recorded evidence of how music was heard in the past,” said Hogwood, a conductor, musicologist and musician.

Hogwood,  a professor of music at Gresham College, London, and emeritus honorary professor of music at the University of Cambridge, said such a wealth of recordings will allow people to pursue a historical interest in music, and that music of the 19th and 20th centuries can be observed and judged by everyone, not just expert musicians or historians.

He likened musical study to that of classics: “Classics has gone the same way. Classics in translation is now acceptable academic study. You do not have to necessarily read the Greek alphabet to talk knowingly about Homer.”

Hogwood warned that when listening to early musical recordings one must be careful. “The idea that music is like a Darwinian progression where each generation gets better and better has long been given up,” he said. “But a serious appreciation of what one can find from earliest possible recordings is still awaiting scholarly analysis.”

To demonstrate the dangers of listening to early musical recordings haphazardly, he pointed to a choir recording from 1888 in the English Crystal Palace. The choir sounded nearly silent, and the track was almost inaudible, but Hogwood said that the choir was actually more than 3,000 people performing for an audience of almost 24,000 people.

“Recordings do and can preserve certain things that can never be found again,” he said. “The price of that is, of course, that they’re enclosed in their own ambers. Every year, we’re getting used to getting through that surface noise and hearing things that no longer exist.”

Hogwood said that he was concerned that career musicians cut out amateur players and amateur listeners. He said that in the days predating recording devices, people were forced to become amateur-level performers if they hoped to entertain a group.

In such times, “for the majority of people who have heard of music by composer reputation, the only chance of having the experience of live music was getting to know it in a reduced form,” Hogwood said. “Some of these reductions are extremely telling, and nowadays extremely important.”

Hogwood closed his lecture by saying that if we continue to propel such music by musicians, amateur-level or otherwise, who enjoy playing as much as their audiences enjoy the product, we would all be beneficiaries.

During his residency on campus through Oct. 31, Hogwood will participate in a symposium on collections, coach two Cornell ensembles and lead a music seminar. All events are free and open to the public.

Mark Ezzo  '14 is a writer intern for the Cornell Chronicle.