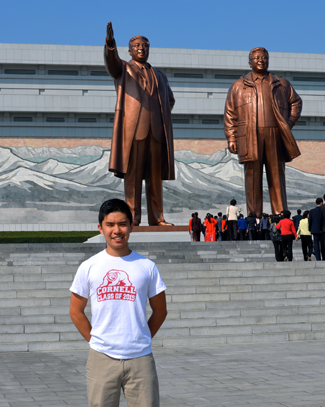 Visiting Pyongyang Medical College among a team of 12 health professionals, Lee-Park observed and assisted with surgeries, toured medical facilities, chatted with medical students and interviewed a neurosurgeon about the nation’s health care during the group’s five-day stay. He saw firsthand the socialist nature of North Korean health care – a stark difference from the capitalist system he knew back home and had studied in Cornell policy analysis and management professor Sean Nicholson’s course on United States health care.

“[The medical students] smiled and very proudly told me that the government sends students to college for free – and that is consistent with the medical system, that it’s also free. Even intensive surgeries do not cost a penny,” said Lee-Park, a student in human biology, health and society in the College of Human Ecology who is considering a career in medicine. “At first I was envious, but I remembered that it comes with many costs of personal freedom. Government permission is required for every decision, and physicians earn little more than everyone else.”

In addition to informal conversations with North Korean medical students, Lee-Park also interviewed the chair of Pyongyang Medical College’s Department of Neurosurgery for 90 minutes, learning about the nation’s current medical techniques and the history of its health care system. Along with a physician who made the trip, Lee-Park hopes to publish a report on his findings for a medical journal. 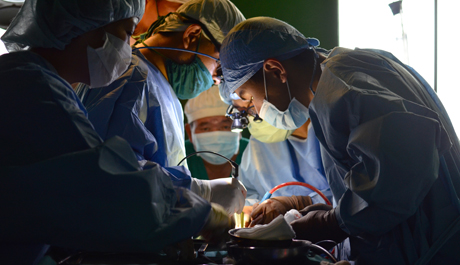 The only undergraduate on the team, Lee-Park arranged the visit by writing to a U.S. physician who teaches surgical techniques to North Korean doctors. The doctor put him in touch with a group heading to the region from the Korean American Medical Association, whose mission includes sending doctors and supplies to support medicine in North Korea.

But for Lee-Park, a native South Korean who immigrated to the United States with his family in 2005, the trip was equally important to understanding the social and cultural aspects of life north of the 38th parallel. Though he was confined to the nation’s capital, Lee-Park encountered numerous unexpected aspects of North Korean culture while touring Pyongyang: an amusement park, statues and landmarks, and an elaborate children’s music and art performance.

“Everything I saw was very unique,” he said. “Exploring the city was unreal. All buildings were beautiful and big – often with posters of the two great leaders in front, which gave off a little eerie feeling. American media give the idea that North Korea is constantly brewing with missiles, focusing on the unreasonable rulers … but the everyday life of North Koreans, at least in the capital, nearly mirrors ours.”

What stood out the most, Lee-Park said, was a widespread desire for reunification with South Korea. Over dinner with a North Korean doctor, they discussed at length the prospects for peace.

“It was an incredible privilege to meet North Koreans and hear their sentiments, to physically see the land – and in that I realized that they were my fellow people, that we speak the same language, love our families and are all humans,” he said. “Understanding is the first key to any peace and compromise.”

Dani Corona ’15 is a student communications assistant for the College of Human Ecology.