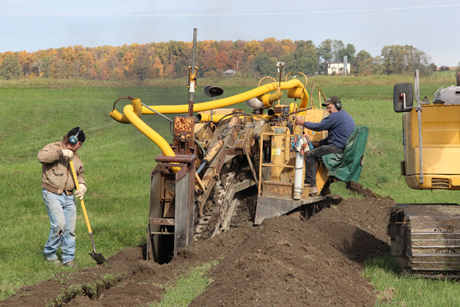 Cornell hydrologist Todd Walter and his colleagues Larry Geohring and Tammo Steenhuis may have found a simple solution to a complex pollution problem caused by agricultural run-off: wood chips.

By strategically placing organic matter to stanchion the water flow between farmers’ fields and nearby ditches and streams, he hopes to trigger a natural chemical reaction in which bacteria capture nitrogen in the run-off and help transform it into less dangerous gaseous forms.

According to Walter, associate professor of biological and environmental engineering, the drainage systems that help salvage wet fields can also help ferry pollutants into our water supply. “Tile drains” – which are actually perforated pipes – quickly whisk water away from fields before it has a chance to soak through landscape and benefit from natural “filtration” processes. This can lead to elevated levels of nitrogen, phosphorous and other nutrients found in fertilizer that feed algal blooms and rob waterways of oxygen needed to support fish and other life forms.

Whether the weather brings too much rain or too little, managers at Musgrave Research Farm will be prepared, thanks to a $50,000 project funded by the Cornell University Agricultural Experiment Station (CUAES).

Approximately 38,000 feet of tile drain pipes now underlay 28 acres of fields at the Aurora, N.Y., research farm. The perforated pipes will help transport water from the fields into nearby Paine Creek during excess rainfall.

Drip irrigation on CUAES farms will also help in times of drought, courtesy of two trickle carts that provide pressure reduction and filtration for the system. In 2012, use of drip irrigation on a six-acre field reduced water consumption by 90 percent compared to overhead irrigation. According to Steve McKay, farm manager of the Thompson Research Farm, the benefits don’t end there.

“When drip irrigation is used in place of overhead irrigation in a dry season, we also see less weed growth between rows and a reduction in foliar crop diseases,” he said. “It all adds up to better plant growth and better research conditions.”

His solution is to dig large square trenches that are then filled with wood chips and buried. The field drains would flow into these “bioreactors.” The decomposition of the wood chips would release carbon that feed bacteria. The bacteria, in turn, would use nitrate from the run-off water as part of their respiration process, converting it to nitrate gas.

Some of the trenches will also contain biochar, a charcoal-like material created from the carbonization of biomass, which has been shown to help absorb phosphorous and pesticides in soil. Finding natural ways to control that pollutant as well would be a valuable added bonus, Walter said.

They will work with four or five farms in Upper Susquehanna, in the Chesapeake Bay watershed, where an estimated 300 million pounds of polluting nitrogen has led to poor water quality and a spot on the Environmental Protection Agency’s “dirty waters” list.

Similar techniques have been tested in the Midwest; in Iowa, environmental incentives have been set up to help defray the costs of installation, which range from $7,000 to $10,000 to treat drainage from 30 to 100 acres.