That is the contention of a new book edited by Cornell’s Christopher B. Barrett, “Food Security and Sociopolitical Stability” (Oxford University Press, 2013).

The book points to a surge of urban food riots in low- and middle-income countries when food prices spiked in 2008 and 2011 – and cautions that the most destabilizing effect of higher food prices might be induced competition for land, water, fisheries, even animal and plant genetic material, any of which can spark violence. 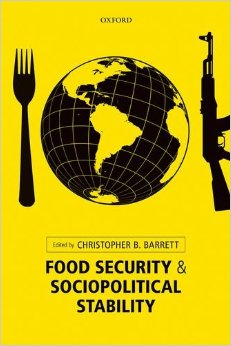 The world has entered a new era of steadily rising food prices – in part aggravated by climate change – and the specter of widespread food insecurity and sociopolitical instability should be on the minds of policymakers worldwide, Barrett and other essayists in the book warn. They say the means by which governments, firms and private philanthropies tackle food security challenges will fundamentally reshape the relationship between food security and sociopolitical stability through 2025.

Barrett and his co-authors acknowledge recent efforts by some governments and philanthropic organizations to “resuscitate agricultural research and technology transfer ... and accelerate the modernization of food value chains to deliver high-quality food inexpensively.” But they question: Will such well-intentioned efforts suffice?

Barrett is the Stephen B. and Janice G. Ashley Professor in the Charles H. Dyson School of Applied Economics and Management, where he will become the David J. Nolan Director in January 2014. He is also a faculty fellow at the Atkinson Center for a Sustainable Future, and holds a faculty appointment in Cornell’s economics department.