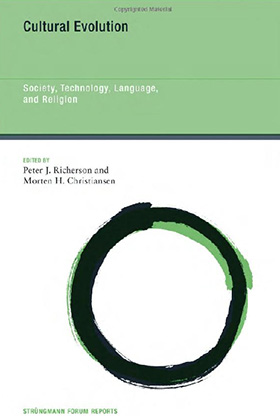 Highlighting the integrating role of cultural evolution across the social sciences and the humanities, similar to that of organic evolution in biology, the Department of Psychology’s Morten H. Christiansen is the co-editor and one of three dozen contributors to the recently published “Cultural Evolution: Society, Technology, Language and Religion” (MIT Press, 2013)

“In our species, genetic evolution and cultural evolution are inextricably linked,” Christiansen writes in the new book’s introduction. “Our bodies are adapted to acquire and use culture, and our cultures are adapted to help our genes perpetuate themselves.” Indeed, Charles Darwin applied the concept of “descent with modification” to the evolution of societies, technologies and languages as well to the evolution of biological organisms, according to Christiansen and his co-editor, Peter J. Richerson, a faculty member in the University of California, Davis, Department of Environmental Science and Policy.

Christiansen notes that “although a growing body of research has established the key role of cultural evolution in understanding human behavior, wider application of these insights has been hampered by traditional disciplinary boundaries. To remedy this, key players from theoretical biology, developmental and cognitive psychology, linguistics, anthropology, sociology, religious studies, history and economics were convened to explore the central role of cultural evolution in human social structure, technology, language and religion. This resulting volume synthesizes past and ongoing work on cultural evolution and sketches a road map for future cross-disciplinary efforts.”