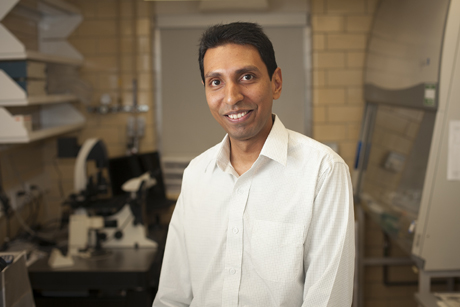 Plant breeders hunting for genes to combat new diseases or adapt to changes in climate can plumb the vast diversity of crops and their wild relatives using envelopes of seed banked in cold storage, but cattle breeders are limited to herds here and now. A new $500,000 U.S. Department of Agriculture grant, however, is funding research on a new, stem cell-based system that could capture global herd diversity in a subzero vault.

“Right now the repositories for breeding and research only store sperm, but sperm is not an inexhaustible resource – you can’t make more once it runs out – and it only contains half the genome; the other half would be provided by eggs,” said principal investigator Vimal Selvaraj, assistant professor of animal science. “So although cows are technically abundant around the world, artificial insemination using relatively few bulls of a few breeds is making cows ‘genetically endangered.’”

Problems related to low diversity are already appearing, says Selvaraj, including infertility, reduced conception rates and fewer cycles of lactation, which results in lowered milk production. In addition, herds of the future may need genes that are in danger of being bred out.

“Many interesting indigenous breeds of cattle in Asia and Africa are disappearing as they are bred with Holstein or Jersey sperm to boost milk production,” he said. “Ankole cattle from West Africa are hardy animals that are able to withstand harsh climate with limited water resources, a drought tolerance that could be very important in the future. This technology would allow us to put the brakes on the loss of genetic diversity.”

The grant will enable Selvaraj to pursue a method to preserve cow diversity using induced pluripotent stem cells. Unlike stem cells that are made from embryos, these are coaxed from mature cells. With the right exogenous factors and chemicals, they can be reprogrammed to be induced into primordial cells capable of becoming many cell types.

“The method doesn’t require an embryo as starting point, and it can be done irrespective of age or sex, using tissue collected from the animal,” said Selvaraj.

A similar system is already working in human and mouse models, but the grant will enable Selvaraj to refine the method for cows in two ways: identifying the species-specific growth factors for bovine stem cells and avoiding the use of viruses as part of the protocol, because they can induce new and unwanted mutations.

The applications Selvaraj envisions for the technology range from the practical to the futuristic. The pluripotent stem cells could be stored indefinitely at subfreezing temperatures, as plant seeds are currently stored. When needed for research or breeding, they could be thawed and induced to form embryos, which could then be implanted into a female cow to mature.

And because the stem cells can be grown in dishes in the lab to ramp up their numbers, they would form an inexhaustible supply. It might not sound urgent now, given the global abundance of cows, but in a hunger-driven future, they could be a key to food production.

“At the moment, the climate hasn’t been too friendly to cloning, but we might reach a point where the demand for food is so great that we might have to rely on it as a quick and efficient means of developing herds,” said Selvaraj.

The preliminary research for this project was partially supported by the Cornell University Agricultural Experiment Station’s USDA Hatch funds.