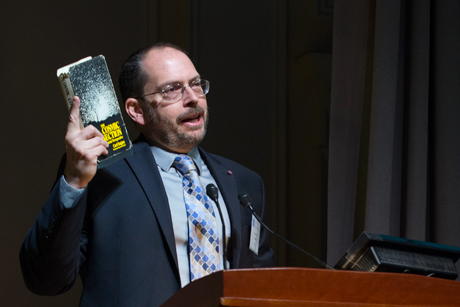 John Harrington
Astronomy Professor Jonathan Lunine addresses a celebration Nov. 12 of the late Cornell Professor Carl Sagan at the Library of Congress, on the occasion of his papers being deposited there.

WASHINGTON – Replete with letters to budding astronomers, simple to-do lists, scientific notations and journal article drafts, the Library of Congress has received 1,705 boxes of the Seth MacFarlane Collection of the Carl Sagan and Ann Druyan Archive. The collection was dedicated Nov. 12.

Sagan, the late Cornell professor of astronomy, showed Americans how to grasp science via his popular PBS television show “Cosmos” in the 1980s. He frequently appeared on “The Tonight Show” with Johnny Carson. He graced the cover of Newsweek magazine, frequently wrote about science for Parade magazine, authored numerous books, won a Pulitzer Prize and spent two decades as a household name until his untimely death – at age 62 – in 1996.

“Like millions of other science lovers, I was heavily influenced by Carl Sagan [while] growing up,” said entertainer and humorist Seth McFarlane, who will produce an updated version of “Cosmos” this spring. “He was the only way we got our science information in a digestible form. He made it accessible, he made it exciting to people who weren’t going to be mathematicians or physicists.”

As a high school student, Lunine had read Sagan’s book, “Cosmic Connection,” and was beguiled by its content. Lunine wrote to Sagan – on yellow lined paper – to ask, “How do you become an astronomer?” Sagan replied with a two-page answer, suggesting he study physics and mathematics. “Carl’s letters had the clarity and the eloquence that his books do as well. He had an amazing dynamic range in his ability to write,” said Lunine. 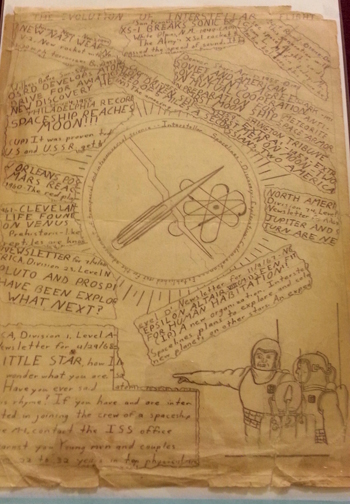 Blaine Friedlander/Cornell Chronicle
A drawing of the "Evolution of Interstellar Flight," which is believed to have been drawn by a young Carl Sagan sometime between 1944 and 1947, shows his vision for the future of spaceflight. It includes a hopeful notion of the Soviets and Americans reaching the moon together.

Porco, once the youngest scientist to work with Sagan on the Voyager I imaging team, explained how the mission captured the famed “pale blue dot” photograph in 1990. On July 19, 2013, the Cassini imaging team – which Porco leads – had the world wave to the camera as Cassini turned its lens toward Saturn and the inner solar system. The Library of Congress audience saw a new blue dot image that includes Earth and its moon. “This one’s for you,” Porco exclaimed to Sagan.

With Sagan’s original creative team – Soter and Druyan – McFarlane is producing the 13-part “Cosmos: A Space-Time Odyssey” with Fox and the National Geographic Channel. The series, hosted by Tyson, will air next March and explore how humans began to comprehend the laws of nature and find their place in space and time.

At a press briefing, when asked about the Library of Congress response to the new collection, Druyan replied, “I’m overwhelmed. I always thought Carl was one for the ages as a scientist.”

Druyan spoke last at the dedication. She said she wished science was more prominent and that “there could be a bureau of science-exciters. Carl Sagans. Neil Tysons. Bill Nyes. People who know how to connect the largest possible audiences.”

She continued, “I’m the luckiest person in the world to have made 20 trips around the sun with Carl, [with memories] that will last me the rest of my life – everlasting joy. Thank you for keeping the flame burning.”