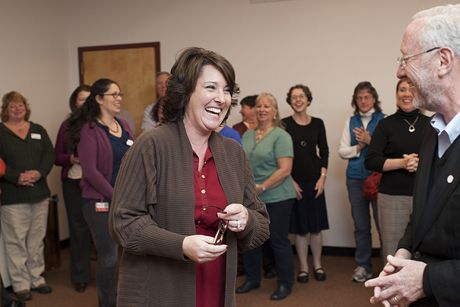 When Nicole Woodhull walked through the doorway to the Hagan Room at Schurman Hall and saw her colleagues, supervisor and dean, she knew she had not been invited to an ordinary staff meeting. But, she later said, when she saw her family there as well – her husband, two sons, daughter, in-laws and grandchildren – she knew it couldn’t be bad news.

And it wasn’t: Woodhull was being recognized with the George Peter Award for Dedicated Service.

Brigitt Schaffner, chair of the Employee Assembly, announced Nov. 1 that Woodhull was the latest recipient of the George Peter award – the university’s longest and most prestigious universitywide peer-nominated recognition. Woodhull supervises staff in the college’s Office of Student and Academic Services and is administrative assistant to Katherine Edmondson, assistant dean for learning and instruction.

“Everything I’ve read about you that you do every day makes you very much a leader on this campus,” said Mary Opperman, Cornell’s vice president for human resources and safety services, who presented the award. Citing Woodhull’s willingness to help, resilience and calm, Opperman called this “one of the most uplifting of nominations.” On behalf of her division, Opperman presented Woodhull with an autographed copy of Carol Kammen’s book on Cornell, “Glorious to View.”

Michael Kotlikoff, the Austin O. Hooey Dean of the College of Veterinary Medicine, said that Woodhull organizes the college’s complicated events in ways that are “seamless and flawless.” “You make it look easy,” Kotlikoff said, adding that the recognition is “well-deserved and well-earned.”

Edmondson, who has served as Woodhull’s supervisor for the past eight years, said that Woodhull represents the college with “poise, grace and professionalism.” She is “consistently helpful” and “cool under pressure” and works effectively with faculty, staff and students, she said. Through “teamwork, adaptability and leadership,” Woodhull excels in mentoring others, leading by example and setting a positive tone in the office, Edmondson said.

Cindy Ryan, administrative assistant in the college’s Office of Student and Academic Services, who works with Woodhull on the college’s graduation events, provided an extended analogy of Woodhull and the world of the Wizard of Oz.

“She never lets bumps in the yellow brick road bother her,” she said, noting that Woodhull has an “uncanny ability to calm nerves,” offers assistance graciously and willingly, and provides encouragement and support to all who come to her. “You can often hear her lighthearted laughter across the hallway,” she wrote in her nomination letter. Ryan credited Woodhull for initiating a monthly administrative assistants meeting, leading to better teamwork and cohesion across the unit.

Once she recovered from her surprise, Woodhull said that she looks forward to coming to work each day, “and that speaks volumes for all of you. Thank you very much.”