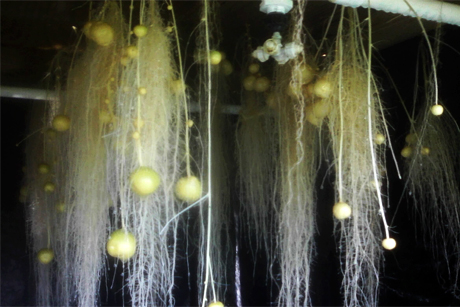 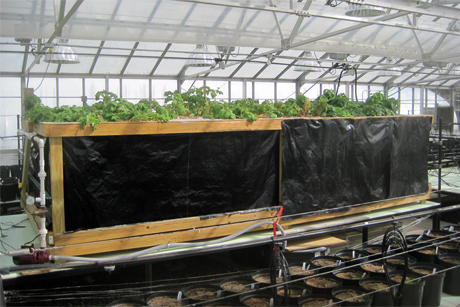 The mashed potatoes or latkes that enhance your holiday feast have taken a long path from tuber to table – in many cases, several years.

A project at Cornell University could trim that time and aid farmers by boosting production in a more efficient, sustainable way. It could also speed up introduction of new disease-resistant varieties to market and ensure that consumers continue to count on locally grown potatoes for years to come.

For the past three years, Keith Perry, associate professor of plant pathology and plant-microbe biology and director of the New York State Foundation Seed Potato Program and the Uihlein Farm in Lake Placid, N.Y., has been working with farm manager Chris Nobles on a novel “aeroponics” system that shows great promise for enhancing potato propagation in New York.

The golden nematode, one of the world’s most damaging potato pests, can remain dormant in soil for up to 30 years.

First detected in the United States in 1941 on Long Island, it has been confined to nine New York counties for more than 60 years, thanks to an effective quarantine, breeding and propagation program, led by Cornell, and the efforts of the U.S. Department of Agriculture and the New York Department of Agriculture and Markets. If golden nematode were to become more widely established in U.S. potato, tomato and eggplant production areas, annual crop losses could reach $4.8 billion, according to USDA estimates.

To control the pest, Cornell breeders have developed 22 nematode-resistant potato varieties. Walter de Jong, associate professor of plant breeding and genetics, conducts most of that research, and associate professor of horticulture Donald Halseth evaluates the new varieties. They also work with virologist Keith Perry and USDA molecular biologist Xiaohong Wang to understand and test for the nematode.

“With plants, you don’t cure the patient; your main goal is to prevent the disease. The only tool we have is resistance,” Perry said. “Golden nematode is present on thousands of acres in New York, but we have been able to keep the population under control because it cannot reproduce and we have prevented it from spreading. ...

“The process has been a huge success,” Perry added. “Losses from diseases have plummeted. We’ve gotten rid of pathogens that used to affect whole farms.”

Locally grown potatoes rely on the efforts of plant pathologists and breeders at Cornell, who have been battling the destructive golden nematode pest since it first appeared in New York soils in 1941 (see sidebar). But to maintain a statewide stock of pathogen-free potatoes for farmers to plant, they must first follow a long process of propagation that begins in the lab.

To prevent plant disease, New York potatoes are grown from tubers, not seeds. “Seed potato” production begins from sprouts grown in test tube cultures. Tiny plantlets are transferred to greenhouses once they are tested to be free of pathogens. In the first year, they are raised in pots of peat moss to produce “mini tubers,” which are grown in fields at the isolated 565-acre Uihlein Farm in two successive years before being passed on to seed potato growers, who cultivate them for another two to three years before selling them to commercial potato producers.

The initial steps are the most specialized and expensive, with limited capacity due to space constraints in Uihlein Farm greenhouses. When Perry learned about an aeroponic system developed by researchers at the International Potato Center in Lima, Peru, he saw potential to free up space, increase efficiency and boost production, so he and Nobles set out to build their own prototype.

The materials list was inexpensive: a large slab of wood, a container to hold solution, piping, a pump, timers and a piece of plastic to create a dark, enclosed chamber. Potato plants grow with their tuber-producing stems suspended in the chamber. Misted regularly with a nutrient solution that is recycled, the plants have thrived, producing dozens of mini tubers over the course of 70 to 90 days, which are handpicked once they grow to the size of a quarter.

This stimulates new tuber growth, with a final yield of up to 5 pounds per plant – 10 times that of potted plants. It also ramps up production of new potato varieties in the first year and gets them planted in the field quicker.

A recent $47,260 grant from the U.S. Department of Agriculture Specialty Crops Program will enable the researchers to install another chamber – twice the size – next year, then another five the following year. In addition to gains in production, the system will produce savings in materials and labor, Perry said.

“This will allow us to do what we do more efficiently, and help the farm to remain self-sustaining,” Perry added.

One potato, two potato ... All about growing 55 disease-free potatoes and more