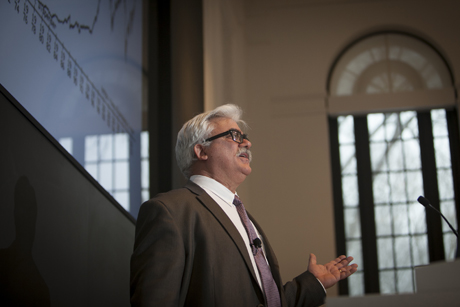 A disturbingly different American landscape – from farm fields and rural communities to supermarket produce shelves – is on the horizon if immigration reform in Congress can’t provide enough legal workers.

“Instead of a thousand acres of vegetables, where 50 people are paid $2 million to harvest, you’ll see the same acreage in field corn with a $70,000 payroll” if labor shortages force growers to change crops, said Maureen Torrey Marshall, whose waking nightmare is millions of unpicked cabbages rotting in her family fields.

Dressel, whose family grows fruit in the lower Hudson Valley; Marshall, the CEO of the Torrey Farms produce and dairy in western New York; and Brandon Mallory, whose Agri-Placement Services attempts to staff dairy farms in New York state and the Northeast, discussed “Staffing the Farm Business: Implications for Managers With and Without Immigration Reform” Dec. 10.

The panel discussion was part of the 2013 Agribusiness Economic Outlook Conference, which brought 147 industry leaders, agribusiness professionals, policymakers, educators and farm managers to Cornell’s Warren Hall. Before the panel discussion moderated by Marc Smith, a Dyson School senior extension associate, began, a pessimistic prognosis came from Thomas Maloney, another senior extension associate, who noted the U.S. Senate’s passage of the Border Security, Economic Opportunity, and Immigration Modernization Act – and the House of Representatives leadership’s refusal to consider that approach. Unless the House can act on immigration reform before March or April in the upcoming election year, Maloney predicted, compromise on federal legislation to provide sufficient legal farm workers won’t come until 2015.

Maloney urged his audience to keep impressing on legislators the need for many more immigrant guest workers with temporary visas to fill the agricultural jobs that unemployed Americans won’t accept. Dressel, a recent CALS grad, said she has tried again and again, “but nobody wants to get their hands dirty in an election year.”

Mallory, the staffing services executive, said the popular notion that immigrant workers take jobs away from willing-to-work Americans “is a laughable lie.” In fact, few unemployed American citizens want the arduous labor of dairy farming that his workers – primarily from Mexico and Guatemala – perform for $8 an hour and housing.

Marshall, the agribusiness executive with more than 30 years in farming, caught the conference audience’s attention with stories of ICE (U.S. Immigration and Customs Enforcement) raids on her fields. “Workers whose families had been with us for three generations, workers who were vetted by the New York State Department of Labor, were led away in chains,” she said, then suggested one way to get the labor-shortage message across: “A two-week shutdown without shipping milk or vegetables.”

Afternoon sessions at the conference, presented by the Charles H. Dyson School of Applied Economics and Management covered the agribusiness outlook for grain and feed; dairy products; dairy policy; fruit and vegetables; grapes, wine and ornamentals; and “Utilizing Eye Tracking Technology with Consumers of Horticultural Products.”

Dyson School professor Steve Kyle (see sidebar) spoke on the “Current Situation and Outlook for the National Economy” and gave himself “an A-minus” for the actual outcome of last year’s predictions.

A slowly recovering American economy is a likely prospect in 2014; a truly strong and convincing recovery would happen only if most fiscal-policy options on Steve Kyle’s wish list come true:

If government commits to rebuild infrastructure . . . if federal aid to states employs more cops and teachers, bolsters poverty programs and extends unemployment compensation . . . if the “Congressional crazies” recover from their “debt and deficit obsession” in the upcoming election year . . . maybe, just maybe better times are ahead. Raising the minimum wage is another move that would help but is unlikely to be implemented by year-end. That was the forecast by the Dyson School of Applied Economics and Management associate professor to the Dec. 10 Agribusiness Economic Outlook Conference.

Annual predictions by the teacher of macroeconomics are a much-anticipated highlight of the outlook conference, which attracted more than 140 agribusiness leaders, academics and farm managers this year, and Kyle’s rousing “Current Situation and Outlook for the National Economy” did not disappoint.

Kyle, who posts forecasts on the Web – and leaves them there all the way back to 2004 – self-graded himself “an A-minus” for the 2013 edition. Only his prediction that “Greece would politically implode in 2013” evidently isn’t happening (but wait ’til next year, when Kyle adds Spain to his list of economically troubled nations that might overturn governments and leave the European Union).

He was particularly proud of the prediction that unemployment would “continue its excruciatingly slow drift downwards” to the “area of 7 percent,” gleefully pointing to the most recent number reported the previous Friday: “Seven-point-oh percent!”

Unemployment in 2014 could drop to the mid-6-percent range, Kyle forecast, “but only if the GDP recovers” at the growth rate he forecast: “Three percent, or a bit more if fiscal policy stops contracting . . . or a bit less if Europe has a serious crisis.”

Back to the minimum wage in the Q-and-A period, Kyle repeated other economists’ observations that $11 an hour is not unprecedented. Adjusting for inflation, in 2013 dollars, that’s where the minimum wage was in the mid-1960s, the Cornell economist noted. A minimum wage of $11 or even $15 an hour for retail and fast food workers might dampen profits for McDonald’s – forcing restaurant chains to hike the price of hamburgers by 10 or 15 cents – Kyle said, and would save billions in food stamp aid to low-wage workers and their families.

A 10-cent rise in burger prices would suit Kyle just fine – not that he eats at McDonald’s, he insisted, “except when Thruway rest stops leave no other choice.”