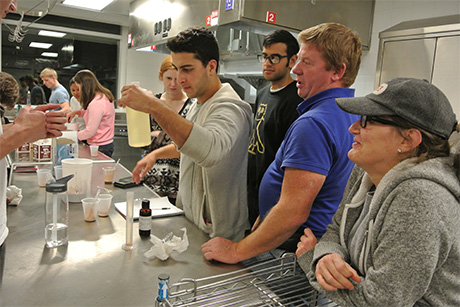 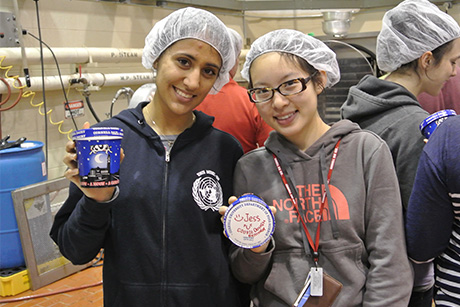 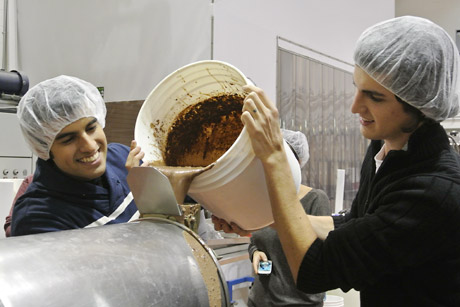 Andrea Alfano
Rishi Kalra and Luke Goodman create their own flavor of ice cream at the Stocking Hall pilot plant. 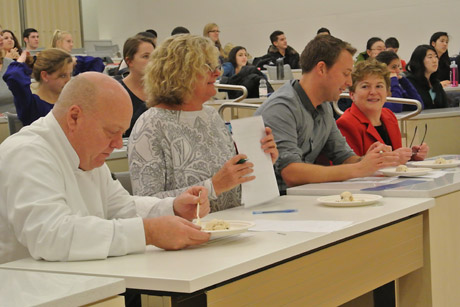 The popular ice cream flavor was revamped as part of a popular end-of-the-year project in Cornell’s introductory food science class.

Instructor Alicia Orta-Ramirez divided the class of 78 students into five teams and challenged them to create flavors based on the newly remodeled home of the Department of Food Science and the Dairy Bar, which will stock the winning flavor when it starts serving Cornell Dairy ice cream again at the end of January.

With its rich dark chocolate base, sugar cookie pieces and white chocolate chips, the winning Cookie Dough Remodel is a fresh take on the popular cookie dough ice cream flavor – or as the students on the team put it, it’s “your favorite flavor rebuilt, revamped, revolutionized.”

“Like the food science department, which everyone at Cornell loved before Stocking Hall was revamped, our flavor is a new, exciting, delicious take on the number three most popular ice cream flavor,” said team captain Laura Fletcher ’17.

The runner-up was a flavor called Stocking Night, which featured a vanilla base with yogurt chips and a blueberry mélange swirl intended to mimic the blue glow of Stocking Hall at night.

Another team appealed to health-concerned consumers with a sesame-flavored ice cream they called Open Sesame. The presenters explained that sesame seeds are rich in antioxidants and high in protein, so the ice cream would be filling enough to prevent overindulgence.

The class worked with senior extension associate Rob Ralyea in the lab and pilot plant to learn technical aspects of commercial ice-cream processing, such as how much milk-fat content would be acceptable to the discerning palate, how much overrun (air content) to put into it, and how many crunchy tidbits to use. Among the measuring cups, scales, ice cream ingredients and spoons scattered on the lab table were some more unexpected tools: calculators.

“I didn’t realize how much calculation was involved in making ice cream,” said Rishi Kalra ’14, a nutritional sciences major.

“It’s surprising how much small variations can change the taste. Even just one milliliter of vanilla extract can change the entire flavor,” added Luke Goodman ’17, an information science major.

Each team also performed market research and cost analysis, and put together professional presentations about their products.

For food science major Isabella Riley ’17, it was a great way to apply what she has been learning in all of her classes, especially chemistry and food science.

“Since we’re working on both the development and engineering of that product, it’s all kind of coming together,” Riley said.

The class involved students from many backgrounds, including engineers and hotel administration students, a diversity that contributes to the innovation and makes the competition so exciting each year, Orta-Ramirez said.

“You never know what they’re going to come up with,” she said. “That’s the fun part.”

Andrea Alfano ’14 is a student writer for the College of Agriculture and Life Sciences.