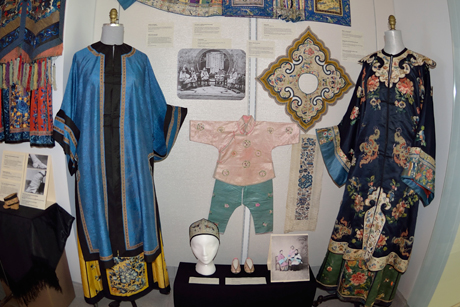 Mark Vorreuter
Women’s and children’s styles held in the Cornell Costume and Textile Collection from the late Qing dynasty period (1840-1911).

The 12,000-item Cornell Costume and Textile Collection holds many hidden treasures from several centuries of fashion. A new exhibit, “Chinese Traditional Dress and Its Influence (1840-1960),” is putting some of its best Chinese pieces on display in the Elizabeth Schmeck Brown Gallery of the Human Ecology Building.

The culmination of a semesterlong collaboration between guest curator Yehong Wang, a visiting scholar from Wenzhou University in China, and collection curator Charlotte Jirousek, associate professor of fiber science and apparel design, the exhibit provides an overview of Chinese dress of the Qing period and the influence of Eastern style on Western fashions in the early 20th century.

“I knew we had some interesting Chinese items,” Jirousek said, “but Yehong has produced some very in-depth research with really good documentation for these spectacular pieces.”

The earliest garments hang in two cases that allow visitors to compare and contrast fashions of the southern Han population and the northern Manchu, whose dynasty ruled China with a distinct language and culture from 1644 until its overthrow in 1911.

“[In one case], we try to tell the story of a Han family,” Wang noted. On display are skirts and jackets, children’s clothing, photos of foot binding on young girls – a practice eschewed by the Manchu – and so-called cloud collars. Although most embroidery was executed by professionals, “women often did embroidery work for collars and sleeve bends themselves,” Wang said.

Wang pointed out that the culture’s fashions differ most noticeably in women’s clothing. While Han women dressed in a skirt and coat – the exhibit shows several with rich embroidery – their northern counterparts wore coats over long robes, similar to Manchu men.

The Manchu frequently used special badges sewn front and back onto such garments to signify the wearer’s rank within a highly codified system of government. They featured various birds and beasts, and the exhibit explains this symbolism, along with human features, flowers and dragons and other mythical creatures that adorned Chinese garments more generally.

“This is something that’s quite unique about Chinese or East Asian dress,” Jirousek said. “Written Chinese is pictographic, not phonetic, so thinking in images is, I believe, natural to the language. Pictures take on meanings that connect to the linguistic meanings of the pictographs.”

This symbolic language was likely lost on most Westerners who, starting in the 1920s, developed a taste for Chinoiserie (Chinese style), the topic of the exhibit’s final case.

To illustrate this point, Jirousek showed one white coat where the motifs are Chinese but organized atypically. Plus, “the color is absolutely wrong,” she said. “White is associated with death and mourning, and therefore it’s not a color a Chinese person would choose to wear. So this was almost certainly made explicitly for export.”

Conversely, as Chinese consumers became more aware of Western fashions, some of their own clothing began to change, as well. Compared to traditional shapes, for example, a purple dress on display fits closer to the body and may have been worn by either an American or a Chinese woman.

“Dress reflects culture and identity,” Jirousek said. “And fashion is about what’s new. One place you find the new is at the edges, by looking outside of your own culture. You can tell a lot about what’s going on in the world by looking at fashion.”