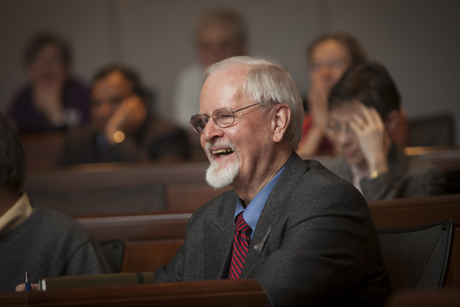 Jason Koski/University Photography
Per Pinstrup-Andersen receives accolades from colleague at a symposium in honor of his retirement.

For the past 40 years, Per Pinstrup-Andersen has been combating world poverty and malnutrition with dogged determination, bark and bite.

Along the way, Cornell’s Great Dane has collected many titles – the J. Thomas Clark Professor of Entrepreneurship, the H.E. Babcock Professor of Food, Nutrition and Public Policy, and professor of applied economics and management – and accolades, including the World Food Prize.

His heaps of praise are almost as high as his stack of publications (the list is 35 pages long), and includes a nod from the late Nobel Peace Prize laureate Norman Borlaug, who once described Pinstrup-Andersen as “one of the most influential economists and policymakers today” and “an outstanding spokesperson for effective economic policies for transforming agricultural production of food deficit nations.”

Colleagues and collaborators from around the world added their tributes as they gathered at the Statler Hotel Dec. 13 and 14 for a celebration and symposium to mark Pinstrup-Andersen’s retirement.

The “New Directions in the Fight Against Hunger and Malnutrition Festschrift” featured presentations from prominent scholars in the field, including several former Pinstrup-Andersen students who hold positions at universities and international institutions such as the World Bank and the International Food Policy Research Institute (IFPRI), where he served as director general for a decade.

Topics spanned nutrition, agriculture, politics and economics, from regional case studies such as “Distributional Impacts of the 2008 Global Food Price Spike in Vietnam” to big-question reviews such as “Ending Hunger Sustainably by 2025: What Will It Take?”

Like Pinstrup-Andersen’s career, the event will have a lasting impact. Papers presented will be published in a book edited by the organizer, David E. Sahn, International Professor of Economics in the Division of Nutritional Sciences and the Department of Economics. A video will also be posted at the Festschrift’s website.

Sahn was one of many speakers who paid tribute to the professor. Others included Shenggen Fan, director general of the IFPRI; Alan Mathios, the Rebecca Q. and James C. Morgan Dean of the College of Human Ecology; Jan Nyrop, senior associate dean at the College of Agriculture and Life Sciences; and Patrick Stover, director of the Division of Nutritional Sciences.

“There are few other individuals who can claim to have contributed so much to diminishing global poverty, hunger and misery, and to uplifting the lives of so many,” Nyrop said.

The speakers said Pinstrup-Andersen’s major accomplishments have not necessarily been technical or scientific, but rather the recognition that true food security will come from reliable policy research, exchange and implementation. He was the first to report the fallacy of a war on hunger that focused on food quantity and caloric density rather than food quality, and pioneered a push for human health as the goal of our agricultural systems rather than simply food production, Stover said.

“No academic is more passionate about his or her scholarship than Per, and that passion is contagious,” Stover added.

As founder of Cornell’s Food and Nutrition Policy Program, Pinstrup-Andersen has also had a profound impact on Cornell culture, and his legacy will continue through a new program: Mathios announced an undergraduate major in global and public health sciences.

“I will always think of Per’s contributions as students going through our program will become the next generation of thought leaders in this area,” Mathios said. “They will mature, they will face new issues, but they will stand on the shoulders of Per.”

When it comes to improving human health, taking care of the planet may be just as important as taking care of our bodies, according to two nutritionists who study environmental influences on maternal and child nutrition.

And climate change could have significant impacts on nutritional security, in ways one might not expect, said Andrew Jones, Ph.D. ’11.

The assistant professor at the University of Michigan School of Public Health urged the global nutrition community to incorporate climate change resiliency strategies into nutrition programs and policies, in a Dec. 13 presentation at an event marking the retirement of professor Per Pinstrup-Andersen.

Jones said ensuring sustainable access to productive resources will be vital to the nutritional security of the world’s growing population in a warming climate. Warmer temperatures may actually be a boon for food production in northern latitudes, but in arid regions and in the low-latitude tropics where most of the world’s poor, food insecure and undernourished populations reside, climate change will likely adversely affect food production.

Most public and scholarly attention surrounding climate change and nutrition has been focused on agricultural production and its link to food security – how warmer temperatures might impact crop performance, for instance. But access to and use of a diverse array of healthy, safe and affordable food is equally important, and often overlooked, Jones said.

While extreme, large-scale events such as the recent Typhoon Haiyan grab headlines, more inconspicuous year-to-year phenomena may have bigger nutritional implications, he said. For example, where warming temperatures result in excessive precipitation and flooding, contaminated water sources may increase the incidence of infectious illness and expose young children in particular to greater nutritional risk. Flooding may also provide habitats for mosquitoes and other disease carriers.

Climate change may also affect people’s ability to earn an income, Jones said. The stability of natural ecosystems is vital to many low-income families whose livelihoods rely on forests and fisheries. The diversity and functioning of these systems may be diminished on a warmer planet. Studies have also demonstrated a link between rising temperatures and intergroup conflict, which may exacerbate the livelihood impacts of climate change, he added.

“As a global nutrition community, we need to devote more attention to understanding how climate change will affect the problems of food insecurity, undernutrition and overweight that we are already confronting on a large-scale,” Jones said. “There are many adaptation strategies we might pursue. Our challenge is to find ways to incorporate climate-sensitive actions into nutrition programs and policies, and to do so with urgency.”