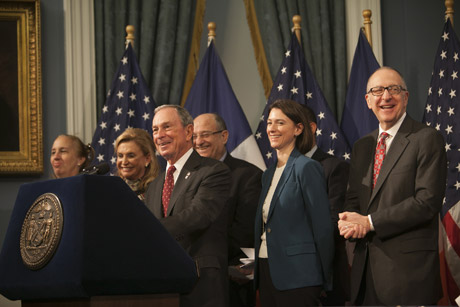 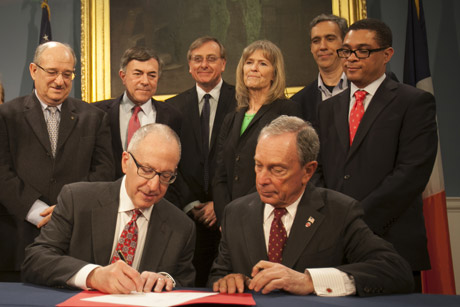 Flanked by government and university partners in the Cornell Tech initiative, Bloomberg, just two weeks before leaving office, recapped how Cornell and Technion – Israel Institute of Technology came to partner with the city to bring the new school to Roosevelt Island.

And then he handed over the keys. With his and Skorton’s signatures, a 99-year lease was executed between the city and Cornell Tech for a 12-acre parcel on Roosevelt Island, marking the official start of Cornell Tech’s permanent New York City residency and paving the way for its groundbreaking in early 2014.

“This is a big day for both Cornell and the Technion – Israel Institute of Technology, and we are very excited to have two such prestigious schools partnering to bring this campus to New York,” Bloomberg said.

Skorton thanked Bloomberg for his vision for the project, and called it a “once in a generation intervention” that “shows government’s power to accelerate growth.”

And he remarked on what a difference two years makes. Since winning the bid, Cornell Tech is “off to a flying start,” Skorton said. It has established the Joan and Irwin Jacobs Technion-Cornell Innovation Institute, has brought its first students to a temporary home at Google in Chelsea, has plunged into the design of the new campus, has hired its first faculty members, and has graduated its first class of computer science master’s degree students.

Peretz Lavie, president of the Technion, described the partnership and the day’s lease signing as a dream coming to fruition.

“It was your vision that inspired this new concept of how you bring academia and industry together in a city for the betterment of humankind,” Lavie said to Bloomberg. 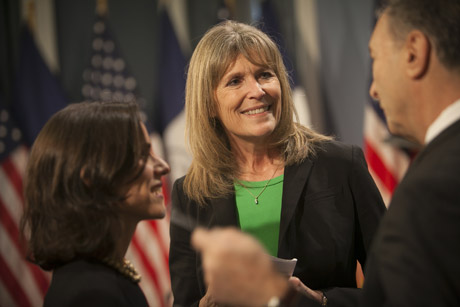 Bloomberg credited Deputy Mayor Robert Steel for coming up with the Applied Sciences NYC Initiative, which promises to bring technology-related jobs and businesses to New York City. The Cornell tech campus was the first – and most ambitious – winner in the competitive initiative; three other universities have since been awarded bids by the city.

Among those in attendance were elected officials who represent Roosevelt Island, which has about 12,000 residents. Cornell Tech Vice President Cathy Dove thanked the island’s leadership for “countless hours” working on making the Cornell Tech plan work harmoniously with the residents there.

“We’ve been committed to working closely with the community to ensure that we are good neighbors and that the campus makes the entire island a better place to live, work in and to visit,” Dove said.