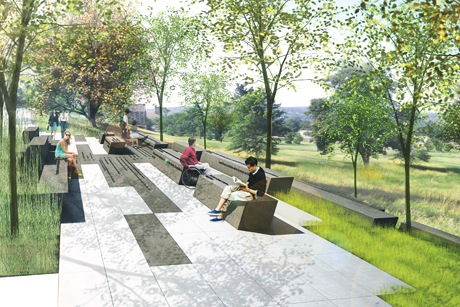 Weiss/Manfredi
A rendering of the proposed grove, benches and walkway. The walkway will include an engraved timeline of significant events in the university's history; the benches will include quotes from Cornellians.

A commemorative grove of trees, benches and a walkway near the top of Libe Slope is in the final stages of design. The Sesquicentennial Commemorative Grove will overlook West Campus and Cayuga Lake and will be aligned with the A.D. White and Ezra Cornell statues on the Arts Quad.

The grove will be installed this summer, with a dedication likely this fall, says Isaac Kramnick, the Richard J. Schwartz Professor of Government and a member of the university’s Sesquicentennial Steering Committee.

Kramnick says that several years ago, as the committee began to look at ways to mark Cornell University’s 150th birthday in 2015, he researched Cornell’s centennial celebration in 1965 and realized that “there was no legacy from the centennial. No building or something produced in the centennial year; no commemorative plaques or anything like that.”

The committee is planning a yearlong celebration for the university and a major event on Charter Day (April 27, 2015), “and then ‘boom,’ it’s over,” Kramnick says. “Shouldn’t there be something that indicates the celebration occurred, something available to future generations, students, alumni, visitors to campus?”

He says he also had noticed there were not many places on campus that honor the university’s history and spirit.

The committee liked the idea. College of Architecture, Art and Planning dean and committee member Kent Kleinman commissioned two graduate students to study how cities, universities and corporations commemorate their history, or “how you physically embody the history of an institution,” Kramnick says.

A design competition was offered and seven or eight submissions received. The winning firm was Weiss/Manfredi, which had designed the Museum of the Earth in Ithaca and is designing the College of Veterinary Medicine’s expansion and one of Cornell Tech’s buildings on Roosevelt Island.

The firm’s 1997 design of the Women in Military Service for America at Arlington National Cemetery echoed a mindset similar to what Kramnick was seeking – something that was historical, commemorative, and that combined artifacts and words. The proposal for a grove atop the slope and aligned with the Arts Quad statues was a “conceptual breakthrough,” Kramnick says. The site is also located just uphill from the area on the slope where Commencement was held for many years.

Over the past year, the design has developed to include a 1,700-square-foot combination of plantings and trees, about 18 benches and judicious night lighting. A subcommittee researched and selected items for a historical timeline of significant events in the history of the university that will be engraved at the ground level; quotes from Cornellians through the decades that “seek to capture the spirit of the university” will appear on the benches, Kramnick says.

“It is a honor to create a new place to convey Cornell University’s rich history,” says Michael Manfredi, M.Arch. ’80, co-founder of Weiss/Manfredi. “At the top of Libe Slope, the Sesquicentennial Grove will shelter a legible timeline of memorable quotes and provide a setting to look toward the future and toward the same horizon that inspired Ezra Cornell when he founded the university.”

The timeline begins with the 1862 passage of the Morrill Land Grant Act and extends all the way to 2011. The final entry is the announcement that Cornell had won the competition to build the tech campus in New York City. (There is room at the end of the timeline to add more history in the future.)

The grove and landscaping project will be fully accessible and compliant with the Americans with Disabilities Act.

The project is expected to cost $650,000. The Cornell Board of Trustees has approved the design, which also was presented to the City of Ithaca Planning Board in December. Construction is likely to begin this summer.

Keith Johnson ’56 has served on several university subcommittees preparing for the sesquicentennial. A former editor-in-chief of The Cornell Daily Sun and a longtime writer for Time Inc., he says he has been interested in Cornell history since he was an undergraduate.

“It was a treat to review the history of the university for that fresh purpose and to think again about what has made Cornell unique,” Johnson says. “I see the grove, in its bucolic setting atop the library slope, as a place for both Cornellians and people unfamiliar with the university to relax, enjoy the view and get a leisurely taste of what is special about Cornell.”