Steve Squyres, Cornell's Goldwin Smith Professor of Astronomy and the scientific principal investigator for the Mars Exploration Rover Mission, looks back on a decade of exploring the red planet - a mission that was originally supposed to last 90 days.

The retrospective recounts the Mars Rovers’ tandem missions in colorful, data-packed images, as well as the Cornell scientific triumphs of the rovers Spirit and Opportunity – when they scooted, scouted and scoured Earth’s neighboring, iron-oxidized planet.

“Mission success came about as a result of the efforts of thousands of committed people. But I think for all of us there’s a great satisfaction in seeing this exhibit,” said Steve Squyres, Cornell professor of astronomy and principal scientist on the mission. “Part of that satisfaction, of course, comes from the story of exploration and discovery that the exhibit tells. But the other part comes from seeing not the pictures on the walls, but the museum visitors who are there to look at the pictures.”

Spirit and Opportunity, the twin Mars Exploration Rovers, were launched from Cape Canaveral, Fla., in the summer of 2003 and each landed on the red planet in January 2004. Squyres led other Cornell professors, researchers and students on this scientific mission across the solar system. Cornell designed, built and outfitted the rovers’ scientific instruments and mission accoutrements. 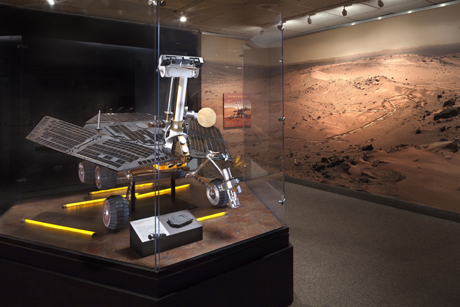 Eric Long, Smithsonian Institution
A full-scale replica of the twin rovers Spirit and Opportunity can be examined in a new exhibit at the Smithsonian's National Air and Space Museum. 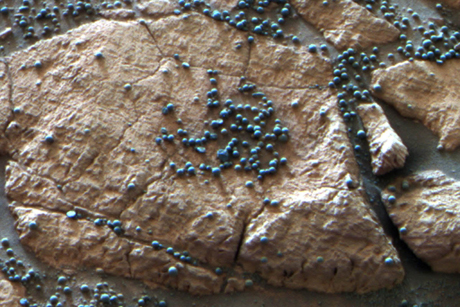 NASA/JPL-Caltech/Cornell University
These loose, BB-sized, hematite-rich spherules are embedded in this Martian rock like blueberries in a muffin and released over time by erosion. The Mars Rover Opportunity found this cluster at its Eagle Crater landing site and analyzed their composition with its spectrometers. This discovery contributed to the scientific story of water on Mars.

“Our rovers were built by people like me who were inspired by space missions, both human and robotic, back in the 1960s and 1970s,” said Squyres. “If Spirit and Opportunity can provide the same kind of inspiration to others, then that’s as important a part of our legacy as our discoveries are.”

Surrounded by super air bags, each rover had landed like a beach ball skipping across a windswept, sandy seashore – after a nerve-wracking (for their Earth-bound human followers) descent through the Martian atmosphere. Spirit landed Jan. 3, 2004, at Gusev Crater, while Opportunity landed at Meridiani Planum at Eagle Crater Jan. 25, 2004.

Spirit and Opportunity each far exceeded the initial 90-Martian-day life expectancy. Spirit eventually traveled 4.8 miles over more than six years before thick dust blocked the solar array’s ability to gather energy and survive the harsh Martian winter. Opportunity still roves the planet; it has traveled more than 23.6 miles over 10 years.

Cornell University, the Jet Propulsion Laboratory and NASA contributed to the exhibit, which runs through Sept. 14, 2014.