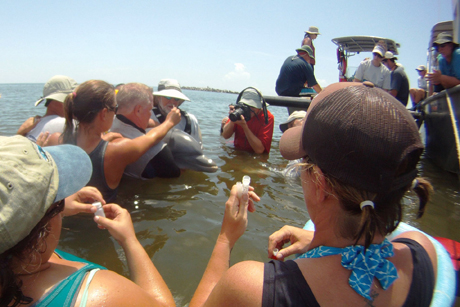 NOAA
A dolphin is tested during the NOAA health assessment.

Dolphin health took a toxic nosedive in one of the areas hit hard by the 2010 BP Deepwater Horizon oil spill, according to a new study led by the National Oceanic and Atmospheric Administration (NOAA) that includes work by Cornell scientists. Published in the journal Environmental Science & Technology in December 2013, their work makes a strong association between the spill and the deterioration in dolphin health in a region of the Gulf of Mexico that received heavy and prolonged oil exposure.

Testing approximately 30 bottlenose dolphins in Louisiana’s Barataria Bay, researchers found nearly half in “guarded or worse” condition, including 17 percent that were not expected to survive. Compared to dolphins tested in Florida’s Sarasota Bay, a control site where no oil was observed, Barataria Bay dolphins were five times more likely to have moderate to severe lung diseases and suffered uncommon hormonal abnormalities. Researchers at Cornell conducting the hormone tests were unaware of the origin of the dolphins included in the study.

“We observed uncommon disease conditions in Barataria Bay dolphins consistent with petroleum hydrocarbon exposure,” said co-author Ned Place, associate professor at Cornell’s College of Veterinary Medicine and director of the endocrinology laboratory in the Animal Health Diagnostic Center. “The Barataria Bay population is loyal to the area, and dolphins could have been exposed to oil by direct contact at the surface or through ingestion while feeding.”

Barataria Bay dolphins tested in 2011 had severely low adrenal hormones, including cortisol, which maintains homeostasis and spikes during stress, and aldosterone, which maintains water and salt balance needed for muscle and nerve function.

Cornell’s Diagnostic Endocrinology Laboratory conducted hormonal analyses on samples collected by a group of scientists and veterinarians led by Lori Schwacke, a NOAA scientist and the paper’s first author. Schwacke had previously evaluated hormone concentrations in different dolphin populations prior to the Deepwater Horizon spill, and these studies established the minimum level of cortisol in unaffected dolphins, as measured by the Cornell Diagnostic Endocrinology Laboratory.

Forty-four percent of dolphins from Barataria Bay sampled in 2011 after the spill had a cortisol concentration that was below the established minimum level, whereas all samples from Sarasota Bay dolphins had values above the minimum.

“These results strengthen the argument that the relationship is potentially causative rather than just correlative,” said Place. “Their low cortisol levels were especially pronounced because you’d expect relatively high cortisol levels after the handling involved with capturing dolphins. Such low levels suggest these dolphins have damaged ability to respond to stress, which compromises their survival chances. Dolphins in this area will likely have more difficulty reproducing as well. The severe diseases and associated deaths raise strong concerns for the future of Barataria Bay’s dolphin population.”

The April 2010 explosion at BP’s Deepwater Horizon rig about 40 miles off Louisiana’s coast spewed oil slicks across 68,000 miles of open water and more than 1,000 miles of coastline.

This study, conducted in August 2011, is part of the Deepwater Horizon Natural Resource Damage Assessment (NRDA) being conducted cooperatively among NOAA, other federal and state trustees, and BP. Funding for the study was provided by BP, and NOAA has shared the collected data with them. BP was not involved in the analysis and interpretation of the data or in the drafting of the paper. According to a statement BP released in December, NOAA “still has not provided BP with any data demonstrating that the alleged poor health of any dolphins was caused by oil exposure.”

Cornell continues to test dolphin samples that were collected in 2013 and sent by NOAA as part of the ongoing NRDA.

Carly Hodes ’10, MBA ’15, is a communications specialist in the College of Veterinary Medicine.

Editor's note: This story was updated Jan. 15 to clarify that NOAA has provided all of the data to BP.