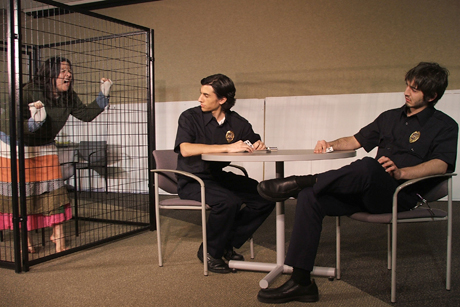 Teatrotaller is celebrating its 20th year of producing Spanish-language theater with the release of a retrospective book.

Founded at Cornell in 1993 by theater major Isabel Ramos ’96 to promote Spanish, Latin American and Latino culture through theater, Teatrotaller produces plays in Spanish and “Spanglish.” The core of Teatrotaller is a course in Hispanic Theater Production; class productions are augmented by volunteers from Cornell, Ithaca College and the wider community.

Cecilia Chapa, an Ithaca resident and longtime artistic collaborator with Teatrotaller, worked with faculty adviser Debra Castillo, the Emerson Hinchliff Chair of Hispanic Studies and professor of comparative literature, to produce the retrospective. “It was going to be a PowerPoint presentation, and it grew,” says Chapa with a laugh. The book includes essays in Spanish and English by Teatrotaller actors, directors and community members. An e-book edition is forthcoming.

A new collaboration between Teatrotaller and La Poderosa, a Chilean group working with at-risk youth, will screen April 7 at Cornell Cinema and at a downtown location. The two groups are holding storytelling/writing workshops with their respective communities that will result in two film scripts; the Ithaca and Chile groups will trade scripts and produce them.

On April 24, Teatrotaller will present “King Kong Palace” by Chilean author Marco Antonio de la Parra. “It’s a social commentary with a mystery at its heart,” faculty adviser Debra Castillo says. “It takes place in a run-down hotel where comic book characters like Tarzan and Jane and Mandrake the Magician keep running into each other.”

In her essay, written in Spanish, Ramos says that Teatrotaller “was born from a simple idea: make theater out of our language, to draw a bridge to our origins.”

She also wanted to do more experimental theater in addition to its more traditional classical and contemporary plays. Teatrotaller’s 2012 production of “Adult Roy’s Badland: A Rave Play” by Jorge Silva ’12 prompted a Cornell Daily Sun reviewer to write: “groundbreaking doesn’t even cover it.”

Teatrotaller has produced more than 60 shows, including world premieres of plays by well-known writers such as Argentinian Nora Glickman and U.S. playwright Elaine Romero. The group has also performed in Belgium, Israel, Mexico, Ecuador, Romania and other countries.

“It’s important to present our productions to international audiences, to help them become aware of the richness of U.S. theater, which is not limited to works in English,” Castillo notes in her essay.

“We were the only theater group not from a theater school,” Minella says. “It was a powerful experience.” Jimmy A. Noriega, Ph.D. ’11, won the Elliott Hayes Award for Outstanding Achievement in Dramaturgy for his work on the show.

Noriega, a theater professor at the College of Wooster, directed eight Teatrotaller productions as a graduate student. He writes that Teatrotaller “can be understood as a combination of art, activism and community-building ... it provides a space and opportunity for Latina/o students to portray characters that speak to their own identities, histories and experiences.”

For Silva, participating in Teatrotaller “taught me the value of social justice theater and the power of change through the stage … Teatrotaller has been incredibly crucial in shaping my identity as a Latino and an artist.”

Many of the group’s 600 alumni, including Ramos, have pursued successful careers in theater, film and television. Some, like Carolina Osorio Gil ’02, remain involved with the group. An Ithaca resident, Gil says she enjoys helping students make connections with the Ithaca community: “Teatrotaller is known for creating quality theater in this community and across the globe, and I am proud to be a part of it.”