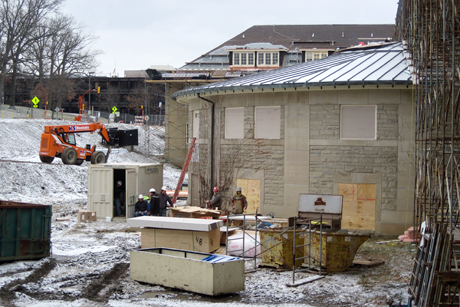 The whipping wind and negative temps have slowed the pace of roof replacement for Goldwin Smith Hall, but digging work at the Klarman Hall site, the future home of the College of Arts and Sciences’ new humanities building, is set to begin on schedule Feb. 3.

Workers have been bundled in all sorts of special gear to face the winter chills, but there’s no way to get around the need for certain minimum temperatures to complete part of the roof project.

“The adhesive used on the underlayment of the roof (the ice and water shields and plywood or copper that go under the slate tiles) can’t be applied unless it’s at least 25 degrees,” said Alex Chevallard, associate manager of projects for Cornell, who manages the construction of the roof replacement project at Goldwin Smith.

And workers are under pressure each day when they work on a section because they need to take off tiles and old underlayment, fix any problems they find and add new underlayment, all in the same day. They can’t leave a portion of roof uncovered, for obvious reasons.

Along with replacing the entire slate roof on the building – which Chevallard said is one of the largest contiguous roofs on campus – workers from LeChase Construction are also adding two dormers on the east side for office space.

“Once the weather gets better, we [add crew] to make up for any lost time in winter,” he said. Slate roofs can last for about 100 years, Tallie said. Portions of the current roof are 109 years old; others were replaced in the 1970s, according to Gary Wilhelm, project director at Cornell Planning, Design and Construction.

Work has focused so far on the east side of the building, Chevallard said, so that workers can be out of the way for construction on Klarman Hall to begin next week.

Klarman Hall will be built by Welliver, a construction management company and general contractor from Montour Falls, N.Y., and will be completed by the end of 2015. 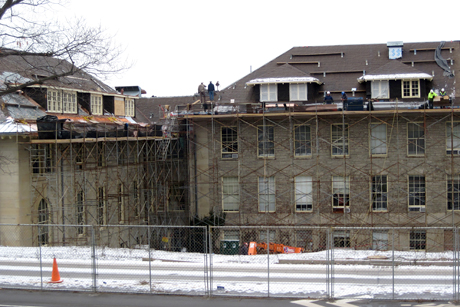 David Taylor
In preparation for the digging for Klarman Hall, workers have been facing frigid temperatures while working on the roof of Goldwin Smith Hall.

Staff and faculty with offices on the east side of Goldwin Smith said goodbye to their outside views for awhile this week, as workers boarded up windows to prepare for excavation, underpinning and blasting that will take place with the new construction.

Crews will dig two holes about 18 feet deep behind Goldwin Smith for the north and south basements and into the hillside along East Avenue 24 feet below the curb to prepare for Klarman Hall’s foundation.

To prepare for the construction, traffic on East Avenue is down to one lane and only open to buses, bicycles and emergency vehicles. Sidewalks and bus stops were relocated at the beginning of the project.

Klarman Hall will serve as a major crossroads for students and faculty from all over campus.  The new, environmentally friendly building will feature a glass-enclosed atrium, a living “green” roof and radiant flooring and be a dominant presence on East Avenue, the main north-south connector for undergraduate students on campus. The university will seek LEED Platinum certification for the building.

The building, which will house offices for the humanities, will also include a large café in the lower level, an auditorium, and outside courtyards and walkway areas. There will be 33,250 square feet of new assignable space, which includes about 124 modular spaces that can be used as offices or conference rooms.