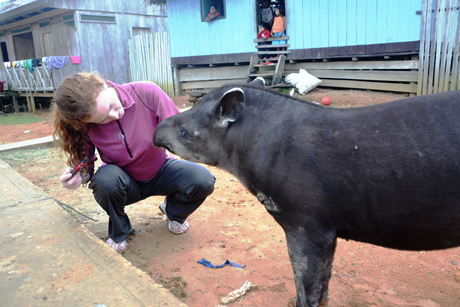 Provided
Emily Aston ’15 examines a tapir as part of her study of the foodborne and waterborne pathogen Toxoplasma gondii. 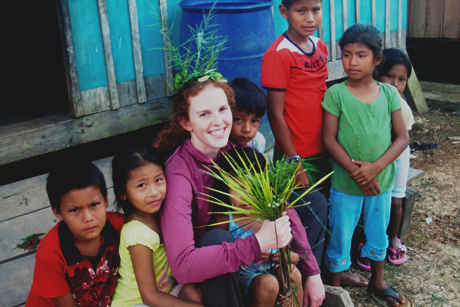 Provided
Aston poses with local children during her research trek in the Peruvian Amazon.

A research study for 10 weeks in summer 2012 led Cornell veterinary student Emily Aston ’15 into the heart of the Amazonian rain forest to conduct the most remote study to date of the foodborne and waterborne pathogen Toxoplasma gondii. Her findings on parasite levels in several wildlife species were published online in the International Journal for Parasitology: Parasites and Wildlife this month. She also created a new way to process samples using a setup simpler than previous methods.

Toxoplasmosis, a disease caused by the prevalent protozoan T. gondii, afflicts humans and animals that come in contact with feces of infected animals or eat their undercooked meat. Aston explored T. gondii prevalence in a remote community of indigenous subsistence hunters in the northeastern Peruvian Amazon. Testing blood samples from several species they commonly hunt, Aston found that between 17 percent and 40 percent of hunted animals were contaminated.

“The study site is isolated from civilization, a six-day boat ride from the nearest city,” said Aston. “Resources are limited, so they rely on the meat they hunt to live. This community was also a perfect home-base for measuring the prevalence of the parasite in a truly wild habitat.”

Until now, no studies have determined the prevalence of T. gondii in such a remote setting – prior studies had only looked at zoo animals or wildlife in preservation zones bordering civilization.

To conduct the study, Aston and her team enlisted the help of hunters to collect blood samples on filter papers from the animals they hunted. Overcoming an unexpected obstacle when she was confronted with some unknown types of filter paper, Aston modified the normal testing protocol to enable researchers to adapt testing to a variety of filter paper types.

To reach the site, Aston traveled on a cargo ship departing from a rainforest city along a leg of the Amazon River infamous for doubling as a cocaine route. Aston’s ship faced a drug bust near the tri-border of Brazil, Colombia and Peru. After three days, she camped on the loading dock with her team’s valuable equipment while bats flew overhead. She then took a small boat for another three days on which four people slept in hammocks hung close enough that they swayed into each other.

Aston became so sick from a parasitic infection that she almost had to turn back, but upon arrival, members of the indigenous community helped her fight the infection. Once recovered, she was in charge of processing hunted animals to find parasites and take samples for further lab analysis. In her spare time, she also helped defend chickens from pirating ocelots.

“The hunters gave me a special gift of ocelot meat,” said Aston. “It was chewy but good with lemon juice. Everyone in the community eats hunted meat: There’s a very high probability that some of it is infected. Most infected people with good immune systems won’t show major symptoms. But fetuses and people who are immunosuppressed may face much greater risks. Toxoplasmosis commonly affects the eye, and I met a man nearly blinded from the infection. He has a wife and two daughters, and now he can’t hunt. It was devastating to the family. I hope this study can contribute to public health efforts in the area.”