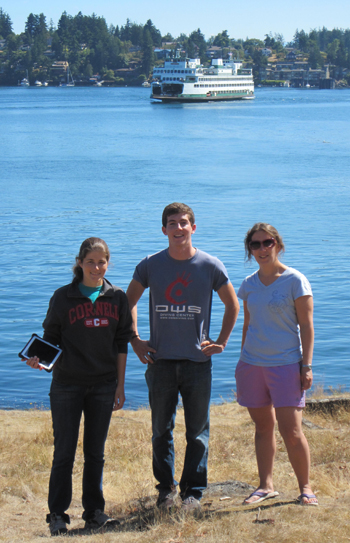 What would motivate you to care about marine disease caused by climate change? The threat of contamination in the oysters you eat? Mass die-off of coral reefs? Multi-million-dollar losses in the fishing industry?

Marine disease is a pressing, yet often overlooked, piece of global climate change, and a group of Cornell professors from a range of fields is collaborating to better understand and remediate the impact of warming oceans.

Drew Harvell, professor of ecology and evolutionary biology; Katherine McComas, professor of communication; and Jon Conrad, professor of resource economics at the Dyson School of Applied Economics and Management, first came together three years ago, in meetings sponsored by the Atkinson Center for a Sustainable Future. A grant from the National Science Foundation allowed the trio to expand their cross-disciplinary work, and more than 50 researchers around the world are now involved in the Ecology of Infectious Marine Diseases Research Coordination Network.

The oceans act as a sink: They absorb one-third of the excess carbon dioxide we emit into the atmosphere, protecting land-dwellers from even harsher climate change impacts. But they do so at their own peril.

“Diseases among corals, oysters, abalone – they are all strongly affected by climate change, but in different ways,” Harvell said. “One of the key reasons to have a research collaboration network is so we can learn from different approaches.”

An even more important reason, as it turns out, is to help scientists respond quickly when a disaster strikes, such as the mysterious disease killing sea stars.

“Diseases in the ocean are terribly understudied,” Harvell said. “This sea star disease came up out of nowhere, and it really helped that we had a network of experts and facilities to call upon.”

The researchers’ work branches in many directions, but it’s informed and inspired by their collaborations with colleagues in many disciplines.

Conrad, for example, drew upon Harvell’s expertise while developing economic models to explore how wild abalone management should change after a virus that caused massive die-offs of the valuable fish off Australia.

Economist looks at costs of a marine disease

Jon Conrad has spent nearly four decades studying how societies allocate and manage public natural resources. The most recent work by the professor of resource economics explores the recent mass die-off of abalone off the coast of Australia. A virus, alleged to have come from an abalone aquaculture facility’s runoff, spread along the coastline, killing up to 90 percent of wild, commercially harvested abalone.

With Daniel Rondeau, of the University of Victoria, Conrad developed a model to explore how the management of wild abalone populations should change in the presence of such a devastating virus.

“The more you harvest down the stock, before the arrival of the virus, the longer it will take for the population to recover,” Conrad said. “But if you don’t harvest it down, and your mortality rate is 90 percent; you lose valuable seafood. We found that it was optimal to harvest the stock down to low levels before it’s killed off by the virus.”

Next, the economists have turned to ecologists to explore answer another question: Would harvesting the abalone before the virus kills them create a firebreak and slow the spread of the disease?

To test how the public perceives risks related to climate change, McComas, Harvell and other Cornell researchers developed a survey for ferry riders in Washington state. Riders were given one of two messages, or no message, then answered identical survey questions on their opinions about climate change. One of the messages emphasized that oysters in the Pacific Northwest were “dying off” because of climate change. The other message said climate change was increasing pathogens in oysters, which could make human consumers sick.

“They did care more about the public health implications, and we’ve seen that in other research,” McComas said.

“When talking about these issues, it’s important to remember the overall goal of the communication,” McComas said. “Some people may never publicly avow that they believe climate change is happening, but they may be willing to support policies to mitigate its effects.”