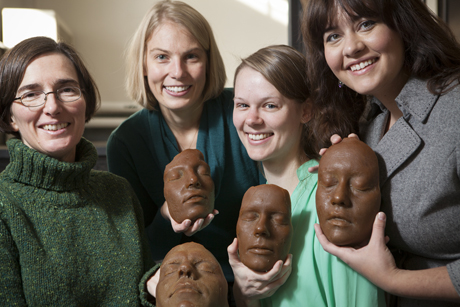 In the heyday of the Roman empire, wealthy and politically powerful families would create wax masks of the male elites in the family. After their deaths, the masks were displayed in their houses and used in funeral ceremonies.

None of those relics remain, but if you venture to the basement of Goldwin Smith Hall, you’ll find three modern-day wax masks that bear an uncanny resemblance to three doctoral students in the Department of Classics in the College of Arts and Sciences.

In a seminar on Greek and Roman portraiture taught by history of art Associate Professor Annetta Alexandridis, the three students were intrigued by the idea of creating their own masks as part of a larger research project on wax as a material in ancient Rome. They presented a poster at the Archaeological Institute of America conference in January in Chicago, and a research paper is in progress.

The masks, called imagines maiorum, were created out of beeswax, according to written sources. During funeral ceremonies, families would hire actors to portray their deceased family members, asking them to wear the masks and recreate the way their ancestors dressed, talked and walked.

The masks were only created for men who had reached a certain political rank. Having a shelf of masks in your home was a status symbol, Alexandridis said, and a sort of dowry for women, who took the masks with them once they married.

“It was actually a good thing to have all of these ‘men in your closet,’” said graduate student Katie Jarriel.

“We found that beeswax tends to be more brittle, so we used foundry wax,” Jarriel said. First, silicone molds were made of each person’s face, with the help of Kasia Maroney, an Ithaca restoration expert who has helped with Cornell’s plaster cast collection. Maroney then applied plaster casting on top to help the silicone hold its shape. Once the silicone had dried, the melted wax was poured in the mold and allowed to dry.

The results were slightly creepy, the students admitted – and even more troubling when Jarriel had to melt and repour fellow student Carrie Fulton’s mask because of problems with the first one.

With ongoing repairs, the masks would probably have started to look abstract after a while, said student Jennifer Carrington.

The women organized a lecture series on the uses of wax in ancient times, supported by a faculty innovation grant from Cornell’s Institute for European Studies. The students brought to campus Harriet Flower, a Princeton classics professor and expert in Roman wax masks, who encouraged them to take their research to conferences and work on a paper, Alexandridis said.

The students say the entire process has allowed them to delve more deeply into topics that interest them.

“Somehow, having an experience like this with the materials, it brings the topic to life,” Carrington said.

Carrington even creatively used her project – filling her mold with Jell-O and sharing it with her friends.

“The Jell-O did not retain the detail, I have to say,” she said, with a smile. “It didn’t fill out my nose.”