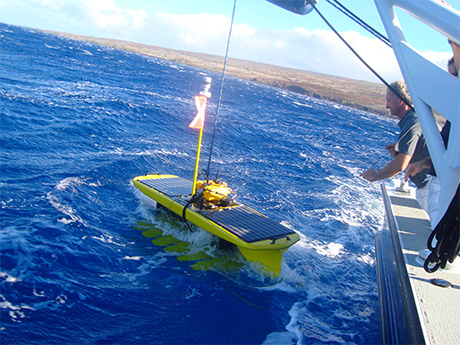 Katherine Kirk
Launching the Wave Glider from a small boat in rough seas off Hawaii.

The first presentation is a tutorial talk about the challenges facing society due to man-made climate change and ocean acidification, both fed by the accumulation of carbon dioxide (CO2) in the atmosphere from burning fossil fuels.

Greene will review some of the recent impacts of climate change, including Superstorm Sandy and a misbehaving polar vortex. He will discuss ideas for meeting the world’s hydrocarbon fuel needs, without fossil carbon, while simultaneously removing CO2 from the atmosphere.

“Society will only be successful in averting dangerous climate change and ocean acidification by directly removing CO2 from the atmosphere,” said Greene.

Using data from a demonstration facility in Hawaii, Greene will show that growing marine algae industrially in an area three times the size of Texas can produce enough biopetroleum to meet the world’s total hydrocarbon fuel demands. 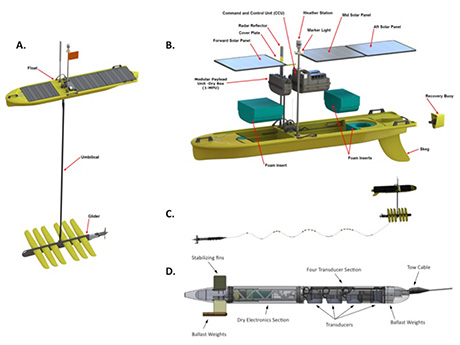 “Algae and a suite of integrated technologies can counter the world’s CO2 problems while also bringing freshwater, food, energy and employment to the desert regions of the world,” he said.

Greene will also present his research using the Wave Glider, a self-propelled, solar-powered, remotely controlled autonomous vehicle for ocean observing. By harnessing wave power for propulsion, these vehicles can cover 12 miles a day and be used to collect data to analyze real-time changes and predict future impacts on marine fish populations and ecosystems.

“Fishery surveys currently cost too much because ship time is so expensive,” said Greene, ”but a fleet of wave gliders running transect lines perpendicular to the coast could provide fisheries scientists with better data, both more synoptic and with improved spatial and temporal coverage. And, it could be more cost-effective, too.”

The talk, “Real-Time, Continental-Scale Acoustic Monitoring of Commercial Fish Stocks in the U.S. Exclusive Economic Zone,” is Friday, Feb. 28, at 8:15 in Room 316B.

Revolutionary tool will methodically track fish populations in the ocean