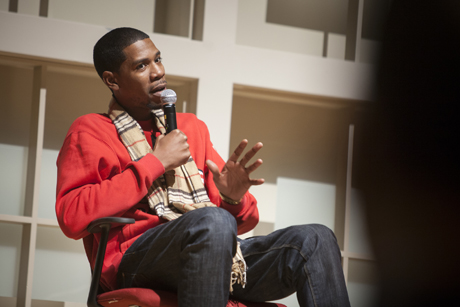 From studying electrician textbooks to learn the basics of sound engineering to recording verses from rap legends, Young Guru made it to the top of his field as a sound engineer – but he’s still perfecting his craft. Gimel “Young Guru” Keaton spoke at the STEM Men of Color “Access to Knowledge and Empowerment” Symposium Feb. 1 in Statler Hall.

Guru has achieved a rare level of success in the recording industry. In his career as an audio engineer, Guru is best known for recording 10 of Jay-Z’s 11 albums, and he has also worked with Eminem, Notorious B.I.G., Beyoncé, Mariah Carey, Rihanna and others. He earned Grammy nominations for his work with Nelly, Kanye West and Jay-Z.

Guru recounted fostering his passion for the sound of music in his childhood home, where his father was a funk fanatic and a DJ. A DJ in his preteen years, Guru learned about speakers while employing neighborhood friends to help him create makeshift equipment. He attributed his growth from a local DJ to an expert in audio engineering and production to his intense pursuit of knowledge.

Guru said he has remained at the top of his field by constantly improving his skills and knowledge. After attending Howard University, Guru completed sound engineering school. Guru credited an educator for instilling in him an important lesson: “You’re not just a sound engineer; you’re a practitioner of audio.” Guru explained the difference as having a broader scope of knowledge and curiosity – traits that have inspired him to expand his experience to record choirs and rock bands.

Guru acquired his moniker as a teenager while performing community service by teaching African history. The pursuit of knowledge was a frequent refrain of Guru’s story, epitomized by his habit of bringing books with him everywhere as a youth.

Although he has earned a number of shout-outs from famous rappers on his productions, Guru insisted he does not solicit publicity. When asked if issues have arisen as a result of other notables in the rap industry having the nickname ‘Guru,’ Keaton responded, “Fame was never my goal. Being good was my goal.”

The College of Engineering hosted the symposium, which celebrated and encouraged the success of men of color in STEM (science, technology, engineering, math) fields.

Guru offered the students words of advice for pursuing a career in a technical field.

Ben Ortiz, curatorial assistant of the Cornell Hip Hop Collection in Kroch Library, joined Guru onstage as a moderator for a discussion.

Sam Wolken ’14 is a writer intern for the Cornell Chronicle.