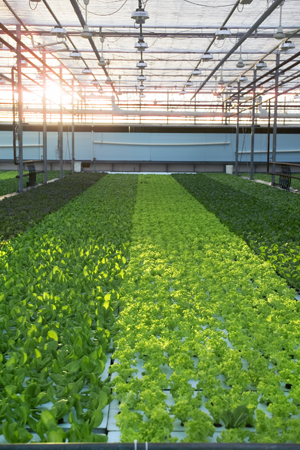 Jason Koski/University Photography
Traditional greenhouses like this one, which produces hydroponic lettuce in Dryden, N.Y., are a more sustainable form of controlled-environment agriculture than indoor urban gardens, according to environmental engineer Louis Albright.

But Louis Albright, an emeritus professor of biological and environmental engineering who helped pioneer controlled-environment agriculture, warns that these “high in the sky” proposals intended to reduce food miles and rejuvenate communities may prove to be “pie in the sky” concepts with detrimental impacts on the environment.

In a Feb. 10 lecture hosted by the Department of Horticulture, Albright argued that closed-system urban farming based on electrically generated photosynthetic light would result in food production with high cost, large energy use, a giant carbon footprint and incompatibility with some forms of renewable energy.

Other crops would be even less sustainable, Albright said. The carbon footprint of tomatoes grown in a food factory would be more than double that of lettuce, and it would cost about $23 per loaf of bread to pay the electricity bill (at $0.10 per kilowatt-hour) for wheat grown in a warehouse farm, he estimated.

A better solution would be installing more traditional horizontal greenhouses around the perimeter of urban areas, he suggested. These “peri-urban” greenhouses would still reap many of the benefits of urban infrastructure – such as water, power, high-speed roads and other transportation options – while avoiding the phytotoxic effects of urban air pollution, and they would capture the most effective, cost-efficient source of energy for plants: the sun.

Glazed greenhouse windows aren’t the perfect transmitters of solar energy – about 30 percent of light gets lost in cloudy Ithaca – but that 70 percent efficiency makes a huge difference, Albright said. In the case of lettuce, it reduces CO2-equivalent emissions to around 2.7 pounds per head – 300 percent less than in a completely closed system.

“LED technologies are improving, and the costs are shrinking, but don’t believe the Internet,” Albright said. “Even if they were to double their efficiency, we would still be looking at 4 pounds of CO2 per head of lettuce.”

As for solar panels, they take up too much space to deliver the amount of energy needed – a one-acre crop of lettuce being grown in Ithaca in optimized conditions would require 9.3 acres of panels, he said. In addition, solar availability may not synchronize with need, leading to energy loss and the need for supplemental energy at other times.

“Must we violate the laws of physics to make it work? I’d prefer not to,” Albright said.

Local food production is not always the most sustainable option, especially when growing crops out of season, Albright added. Even under optimal conditions, lettuce produced in Ithaca greenhouses has a carbon footprint that is barely better than lettuce transported from 3,000 miles away, he said.

“There’s a lot of sentimental attachment to local food production, and the quality is likely to be better, but the phrase ‘food miles’ shouldn’t scare people because the alternative isn’t always better. A system viewpoint is critical,” Albright said.