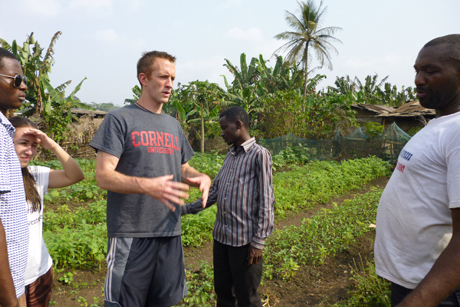 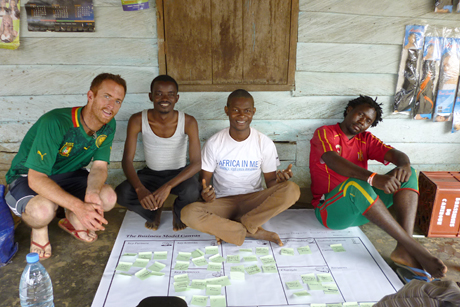 In an isolated jungle village in southwestern Cameroon, Cornell undergraduate Timothy Smith ’14 is laying the roots for an organic cocoa teaching and research farm to help small growers escape poverty.

Smith created his plan after visiting Bekondo, Cameroon, last summer as a volunteer consultant for the country’s WebDev Foundation, which trains rural entrepreneurs and develops health, education and technology resources for underserved areas.

Smith met farmers who made meager profits after paying exporters steep fees and interest for chemical pesticides and equipment to grow their beans. Unproductive, aging cocoa trees; extended rainy seasons that interfere with bean drying and wash out surrounding dirt roads; and limited access to credit from banks also prevent farmers from bringing high-quality cocoa to market. Leaders in Bekondo worry about the migration of young workers to Cameroon’s cities in search of better jobs.

To address these needs, Smith and local partners formed the Bekondo Foundation to improve village infrastructure and empower growers to pursue sustainable, organic cocoa production independent of major exporters. Their focus is to establish computer centers in the village with the help of the Cornell Computer Reuse Association, and to build an organic teaching farm where growers can learn chemical-free disease and pest management techniques.

“Our overarching goal is to increase the economic activity in the area,” said Smith, a policy analysis and management senior in the College of Human Ecology. “This is a collaborative effort everyone’s going to benefit from.”

Smith returned to Cameroon, the world’s fifth-largest cocoa exporter, during winter break, when he presented his plan to the village chief and general council. Together they developed a constitution and operating budget for the foundation, along with a plan to hire Cameroonian interns to work on its goals.

“This was a major step forward, because I worked with the leaders to go over all the costs and make sure we were actually addressing a need the villagers want met,” he said.

With the group’s approval, he hiked along miles of jungle trails to scout farm locations, ultimately finding two parcels that will cost roughly $10,000. Someday Smith imagines farms, buildings for crop scientists, farmers’ quarters and even a tourism center rising on the land.

Back on campus, Smith is raising funds for the Bekondo Foundation and hopes to acquire $50,000 for startup costs by May. His application for 501(c) nonprofit status is pending; meanwhile, he is networking with cocoa importers and chocolatiers in the Finger Lakes and elsewhere for insights on the trade.

Smith remains focused on his studies, on pace to graduate in December 2014. A nontraditional senior, Smith, age 32, came to Cornell in 2012 after studying at Dutchess County Community College for two years. Prior to that, he worked in England as a consultant helping workers relocate worldwide.

“With my corporate background, I was motivated to study policy analysis and management where I could better understand economic disparities, demography, inequality and government affairs,” Smith said. “I have a huge workload between Cameroon and Cornell, but I find that the two go together and help to energize me.”

As Smith advances toward his foundation goals and his degree, he is applying to the Cornell Institute of Public Affairs, where he hopes to continue his international development work as a graduate student.

“I finally feel that I love what I’m doing,” he said. “I’ve always liked to work internationally, to have no boundaries and make a difference in some way. … It really drives me to keep going forward.”